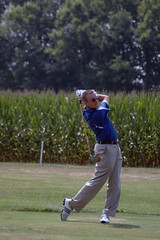 The Salvation Army Women’s Auxiliary hosted the 13th Annual Golf4Giving tournament on Wednesday, August 24. The annual event is for men, women and mixed foursomes. The 18-hole tournament held at the Golf Club of Indiana near Zionsville, drew over 100 players who participated in a day of fun and prizes with beautiful weather.

WISH-TV 8’s Scott Sander was back as both a golfer and the master of ceremonies for the award’s dinner.  “It’s great to see so many people out here support The Salvation Amy in what’s been a rough year for charities,” said Sander.

This yea’rs Platinum Sponsor was Klipsch.  Steve Klipsch, Senior VP and Salvation Army Advisory Board Member, was excited to be apart of the event once again.  “I’ve been to a lot of golf events and this one is as good as any I’ve seen,” said Klipsch.  Also sponsoring the event were Earnst and Young, Royal United Mortgage, and Grant Thornton.

The scramble event began with a shot-gun start at 12:30.  Golfers were provided with a box lunch from Applebee’s and Starbuck’s provided the morning coffee.  Dinner was once again provided by Bravo, with desserts from McAllister’s Deli and Handel’s Ice Cream.  Awards were given for best Men’s Team, best Mixed Team, and best Women’s Team.  There were also awards for longest drive and closest to the pin.

The Salvation Army Women’s Auxiliary is an organization devoted to developing events and fundraisers to help The Salvation Army and their many programs in Central Indiana that serve less fortunate in our community. 100% of this golf event net proceeds will to to help supplement these programs.