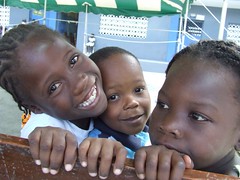 The Salvation Army continues to be a beacon of hope for individuals and families whose lives were devastated by the earthquake. While the Haiti Relief Team maintains support and provides assistance for 20,000 individuals in an area adjacent to their compound in Port-au-Prince, they have reached out to other areas of the country – diligently meeting needs at the point of need at the time of need. There has been a steady, marked improvement in the overall situation in the four weeks since the earthquake. Our own operation has been refined with improved local logistics, communication, accommodation. In addition, better coordination of air traffic means transportation for freight is improved, as well. Relief ministries include the following:
· The Salvation Army Relief Team has established service compounds in three communities – Port-au-Prince, Petit Goave (Satellite), and Jacmel (Satellite). In addition, services are provided to the communities of Croix-des-Bouquets (6 mi east of PAP) and Balan (18 mi east of PAP).
· After being alerted by personnel from the Canadian Military, The Army’s Jacmel Assessment Team investigated Decouze, which is a rural site between Port-au-Prince and Jacmel. The team discovered 500 families who had been completely without outside help since the earthquake. The community was clearly in shock but grateful that, finally, “someone from a foreign land had noticed their plight.” A determination of future service will be made in the coming days.
· The Salvation Army is being recognized internationally as an expert in effectively and efficiently handling this crisis. WORLD Magazine published an article on February 2nd highlighting this phenomenon. Excerpts include the following: “The UN estimates that as many as 1 million people are homeless, and UN emergency coordinator John Holmes acknowledged that aid delivery remains painfully slow. But in other parts of town, private aid groups are quietly getting work done…[The Army distributed] an estimated 552,000 meals [in] less than four hours…While the UN grapples with the maddening conditions of delivering aid in Haiti, groups like The Salvation Army are proving a point: Some of the best aid is coming from the groups with long standing connections on the ground…Despite the damage, within days Salvation Army staffers formed a plan to be the lead group providing care for a crowd nearing 20,000 people near their compound. At a UN meeting last Monday, The Salvation Army was one of just five non-governmental organizations with a concrete plan for managing a camp.”

· In order to increase efficiency, a UPS Trackpad Project is being developed. The Trackpads, provided by UPS, are laptop/handheld scanner/laminated ID cards with barcodes, which will monitor which families receive food at the Point-au-Prince distribution point. This project is expected to begin within the coming weeks.
· The Salvation Army distributed food, blankets, kitchen sets, plastic sheeting, and hygiene kits to 600 families from the Jacmel compound.
· In collaboration with World Concern, The Salvation Army distributed hygiene kits at the Port-au-Prince distribution point.
· Well over 200 people being treated each day.

THE SALVATION ARMY PRESENCE IN HAITI (PRE-EMERGENCY)
The Salvation Army has been officially working in Haiti since 1950. Our present assets in the country include:
· 63 Commissioned Salvation Army Officers
· 161 Employees
· 39 Corps and 23 Outposts (Worship and Community Centers)
· 5 Social Institutions (Clinics, Children’s Homes)
· 46 Schools with 443 Teachers

INTO THE FUTURE
The Salvation Army was active in Haiti before the earthquake. We will rebuild our damaged faculties, while continuing our already well established programs. We are committed to standing by the Haitian people as they move into the future.
· Medical clinics
· Education
· Long Term Relief and Reconstruction
· Community Development Projects / Income generation / Child Nutrition / HIV/AIDS
· Advocacy

Monetary donations and prayer are the two most critical needs as supplies and personnel are mobilized
· The Salvation Army had raised more than $9 million for relief efforts.
· Donors can text the word HAITI to 52000 to donate $10 to The Salvation Army’s relief efforts via their phone bill. It is important for donors to confirm their donation with the word, “yes.”
· Monetary donations can also be made through:
· www.salvationarmyusa.org and via PayPal
· 1-800-SAL-ARMY
· The Salvation Army World Service Office
International Disaster Relief Fund
PO Box 630728
Baltimore, MD 21263-0728
*Please note that your donation is for Haiti Earthquake relief*
· Even before donations are processed, The Salvation Army is committing and spending money on relief efforts in Haiti. Donations are critical now and also help ensure that the long-term needs of the Haitian people are met.