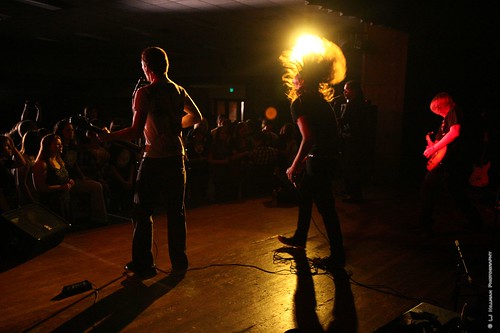 Protest for Pluto, among many other local artists, helped The Salvation Army's Haiti relief effort by participating in the benefit concert Rockin' for Haiti. - photo by Lisa Hillman

Shenandoah High School in Middletown, Ind. was unusually busy Saturday, March 20 with music from several choirs and bands as part of Rockin’ for Haiti – a benefit concert to help the victims of the Haitian earthquake that occurred three months ago. Sulphur Springs Christian Church sponsored the event with music ranging from Christian rock to blue grass and folk.

Church member Celeste Bramlett thought of the idea. “We had one of our youth at church just come home, literally two days from when the quake hit,” wrote Bramlett in an email about the reason for putting on this event. “He was doing mission work at one of the orphanages in Haiti. Also, my supervisor is part of a group called Safe Families and was quickly making arrangements for Haitian children who had been orphaned to stay with his family here in the states for a while. So it was really on a personal level that I wanted to help. I knew if the community got involved in the name of God, great things would happen.”

After Bramlett consulted others about putting on the concert, the support was great. “Everyone wanted to be involved,” says Bramlett.

Concert manager Lisa Hillman decided that all proceeds would go to The Salvation Army’s Haiti relief effort, knowing that all funds donated to The Salvation Army would go directly to aiding the earthquake victims. “We were able to donate $930 from the evening through both door entry and concessions,” says Hillman.

Four hours of music was heard by about 200 attendees that night. With headliner Protest for Pluto and bands The Grasshopper and Exit One9, and many individual talents, the event was a success accomplished through community involvement and compassion.

Click here to view more photos by Lisa Hillman of Rockin’ for Haiti.