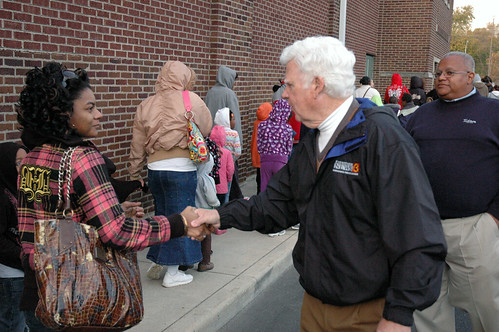 After a week of setting up in the Exposition Hall at the Indiana State Fairgrounds, the 24th annual WTHR/Bob Gregory’s Coats for Kids was in full swing Saturday morning. Crowds were lined up around the building when the doors opened at 8am. Despite concerns about the lacking number of donations early on and the struggling economy, this year’s distribution was blessed with a record total of 9,326 coats.

“What a perfect trick or treat on Halloween weekend. The treat was 9,000 coats given. No trick involved there at all. We also had a lot of citizens donate. I think we had $7,000 to spend in purchasing new coats” said the man who started this campaign 24 years ago, Bob Gregory.

Approximately 300 volunteers gave up their Saturday and worked in shifts to escort families during their shopping experience at Coats for Kids. Some also worked as runners to replenish  racks of coats when the selections ran low. If you’ve ever wondered who our volunteers are, this year’s force was made up of several church groups, WTHR staff, and other individuals without whom The Salvation Army could not pull off such an event. Volunteer Coordinator Elizabeth Wilhelm said, “It was a great day and everything went so well!”

Once again, Tuchman Cleaners played an important role as the official drop off point, cleaner of coats and delivering the coats to the fairgrounds during the week of the event. On hand to greet the children were the Colts cheerleaders, Butler mascot “Blue” and Salvation Army officers.

“Our warmth goes out to those kids and families that for this year  have a new, nice warm coat. Thanks for the treat!” Bob Gregory, retired weather forecaster for WTHR.