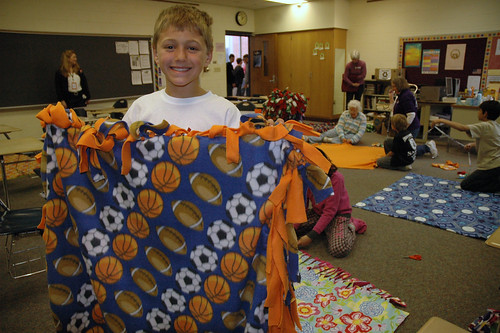 Blake S. holds up one of the blankets made by the students at White Lick Elementary

Emily Steffen had no idea just how successful her Service Learning unit was going to be when she introduced it to her fourth grade students at White Lick Elementary in Brownsburg, IN.

The unit was designed to get the kids interested in serving those in need in their community.  They were surprised to learn that there were children their own age who were homeless.  “They instantly wanted to help,” said Steffen.

The kids came up with the name “Call to Care” and began seeking out ways in which they could help homeless children.  Soon, they were put in contact with The Salvation Army’s Women’s and Children’s shelter in Indianapolis.  “We found out that these kids come to the shelter with nothing and that they didn’t have anywhere else to go,” said Riley Olmstead, one of the fourth graders.

The kids came up with the idea to make blankets for the homeless children because they may come to the shelter without one.  Thanks to a grant, the class was able to purchase the material to make the blankets.  They also got some help in making the blankets from the Consumer Family Science class at Brownsburg High School.

In May, the students will deliver their blankets personally to the shelter, but that’s not all they’re doing.  They’ve also been collecting and donating old cell phones to the shelter.  “The shelter can turn these phones in for money,” said Steffen.  “Some of the phones are worth as much as $30 to the shelter.”   The students will also be packing “welcome kits” for the homeless children when they arrive at the shelter.

You can see photos of the children making the blankets by CLICKING HERE.  Look for more stories about the students from White Lick Elementary in the months to come.