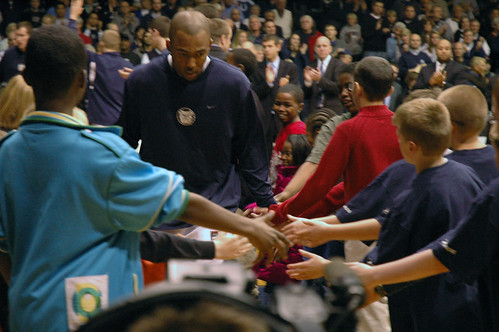 Kids from The Salvation Army's Shelter for Women and Children form the tunnel for the Butler Bulldogs.

Fans decorated in team colors.  Snow cones, jumbo pretzels and buttery popcorn scents fill the air. Hink the bulldog mascot pumping up the crowd – a typical Butler basketball game. But for one group of children, this will be a game they will never forget.

Friday, December 4, about a dozen children from the Indianapolis Salvation Army’s Women and Children’s Shelter attended the Butler versus Valparaiso basketball game.

Before the game the children ate pizza, grapes and cookies in their seats at Hinkle Fieldhouse. When the announcer called the names of the starting players, the children stood on the court helping create a tunnel. The players ran through the tunnel high-fiving each of the children.

For many of the children, this was their first college basketball game. The Salvation Army’s advisory board meets to plan events such as this for the children.

During a break in the game, two of the young boys went down to the court to play a game. The children had to run down the court while stopping to put on a jersey, basketball shorts and shoes. Then they had to run back in their over-sized clothing and shoot a basket. Both children won a gift bag for participating, and the winner won a gift card.

After the game, all the children were allowed on the court to shoot baskets.

Many of the children were too young to have any interest in basketball, but they kept smiles on their faces the whole night.

Board member Bill Ervin, is a former professor at Butler University. Ervin helped organize this event so the children could attend the Butler game. Ervin also has arranged other activities for the children in the past, such as a recent visit to the Planetarium.

During the game, the Salvation Army also set up a toy collection for Wish Tree Toy Drive at three of the gates. Butler gave t-shirts to those who donated.

Scott Evans, the face of MyINDYtv, was there to help with the collection.

“The need is even greater than it has been before, and it’s up to us to help each other out,” Evans said.