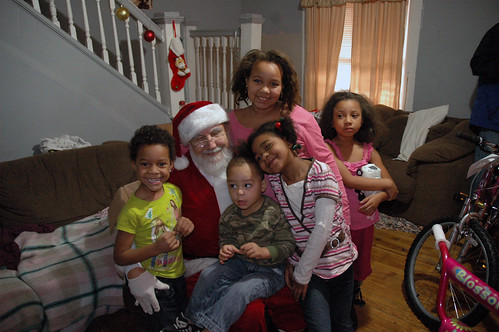 Santa, Two Men and a Truck, and The Salvation Army made a surprise visit to some very happy children on Christmas Eve.

The Salvation Army had it’s annual toy shop Thursday, Dec. 17, 2009 to distribute gifts to those who applied for Christmas assistance this year, but the Christmas presents didn’t end there.

Thirty families in the Indianapolis area received new bicycles. These families were randomly selected from those who applied for Christmas assistance and expressed that their children did not already have a bicycle.

Every year a generous individual donates bikes to give away to children being assisted by The Salvation Army for Christmas. This year there were around 100 bikes donated.

“Praise Jesus, we are so excited,” were the words that Julia Sipes said she heard when she called the parents to tell them they were selected to receive bikes for their children. Sipes is the special projects coordinator for The Salvation Army’s Women and Children’s Shelter. “Everyone was excited and happy,” said Sipes.

Two Men and a Truck helped deliver the bikes on Tuesday, Dec. 22 and on Christmas Eve morning.  Joining them was Santa himself, who made a special trip to Indy before his big night.

Dressed in a Christmas elf hat, Two Men and a Truck employee Shannon Campbell was just one of The Salvation Army’s helpers for the bike distribution.

“I enjoy it,” said Campbell about helping deliver the bikes. He also mentioned that the families seemed extremely appreciative of the bikes because of the difficult economic times.