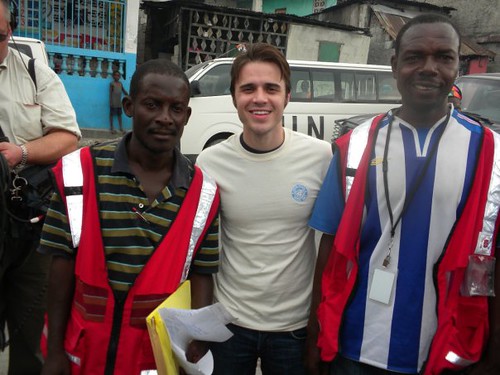 Kris Allen, last year's American Idol winner, teamed up with the UN to pay a special visit to The Salvation Army in Port au Prince

Alexandria, VA – Courtesy of the United Nations, Kris Allen, the 2009 winner of American Idol, recently visited Haiti. The visit’s intention was to bring awareness to the work in Haiti as well as the continued need for support in the ongoing efforts to help those affected by the January 12 earthquake.
The Salvation Army camp in Port-Au-Prince was chosen as one of four locations for Kris to tour while on his whirlwind visit.

The camp is currently home to more than 4,000 Haitian families. Kris toured the camp, visited with staff, and played with children as well as communicated with camp residents through an interpreter.

During Kris’ visit, he met with Major Agnes Wahli who was busy with the registration process and issuing new ration cards as part of the new UPS Trackpad program. The Salvation Army is replacing handwritten paper index cards with high-tech barcode technology to ensure that families receive food, shelter and medical supplies in a highly efficient manner. UPS donated the technology and adapted it for disaster relief supply distribution. This technology will allow Salvation Army staff members to be able to confirm what goods each family receives by tracking the information embedded in a laminated card that bears unique barcodes associated with the family. Kris even helped with one of the registrations!

Kris’ visit ended after chatting with Concern Worldwide and visiting their mother and infant tent and singing Amazing Grace.   Last Thursday’s American Idol results show on Fox featured Kris’s visit as a fund-raiser for the Idol Gives Back charity.