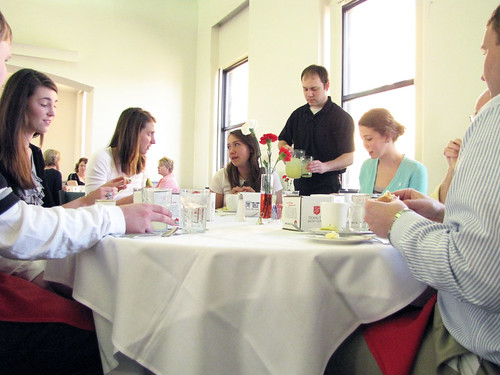 Every seat was filled at the Culinary Expressions Cafe at Ivy Tech Community College. Procedes of the event were given to The Salvation Army.

There were still 12 seats available for purchase at Ivy Tech Community College’s Culinary Expressions Cafe in Indianapolis the morning of April 9, but by noon it was a full house. All attendees awaited a French cuisine three-course meal prepared by students enrolled in the culinary arts program. They started by bringing a bowl of carrot soup with a hint of ginger to the tables.

This is part of class work for these students, but will end up meaning so much more for the community of Indianapolis. The proceeds from this lunch – a total of about $500 – will be donated to The Salvation Army to help carry out the services they provide for the city.

“As a community college we are really involved in the community,” says student chef Ricky Hatfield.

Before the meal began, The Salvation Army’s Indiana Divisional Commander Major Richard Amick began by admitting that his culinary skills do not surpass more than being able to make a mean peanut butter and banana sandwich, but he expressed that he was grateful that others could put on this event for them.

“We do our very very best for this community,” Major Amick told attendees.

This is only the second event put on by Ivy Tech to incorporate culinary classes and donating funds to charitable organizations.

“I think this is a great opportunity to help an organization that has helped so many already,” Dale Kinney, student government president, said. “I’m sure if we had more space we’d have more people.”

Kinney and organizers say that their main incentive for helping The Salvation Army was because they knew the funds were needed due to not meeting the Tree of Lights goal this year. The Salvation Army’s city services include Harbor Light rehabilitation center, the Women and Children’s Shelter, the Eagle Creek Corps and the Fountain Square Corps. These services depend heavily on the Tree of Lights campaign, which occurred during the Christmas season.