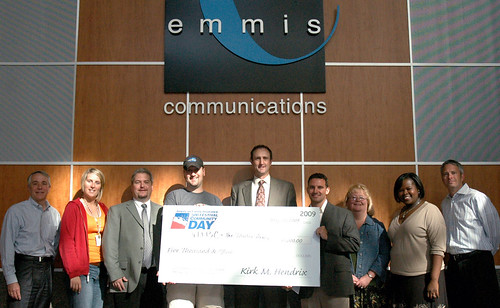 WIBC, American Family Insurance, and the 500 Festival present a $5,000 check to The Salvation Army.

Each year the Media Pitstop Challenge is held as part of Community Day at the Indianapolis Motor Speedway during the 500 Festival.  The competition features local media outlets battling it out by changing tires on an indy car.  The winner of this popular event receives $5,000 to be given to the charity of their choice.

The motivation worked, as WIBC won for the first time in the history of the competition.  “We were shocked.  We’ve never even been close before,” said Kent Sterling, Program Director for WIBC.  “We’re thrilled to win this money for the Army.” added Sterling.  The WIBC/Salvation Army partnership has been going strong for over 15 years thanks to the annual WIBC Radiothon which airs each December and benefits The Salvation Army.

Today, the $5,000 check was presented to The Salvation Army at the Emmis Studios downtown.  The Salvation Army will use the $5,000 prize, made possible by the Indianapolis Motor Speedway and American Family Insurance, for its Shelter for Women and Children in downtown Indianapolis.  Todd Fancher and Josh Johnson of American Family Insurance, and Dave Wison and Brandi Davis-Handy were on hand to present the check.  Also on hand were winning pit crew members Denny Smith, Jamie Sullivan, and Dan McGowan.