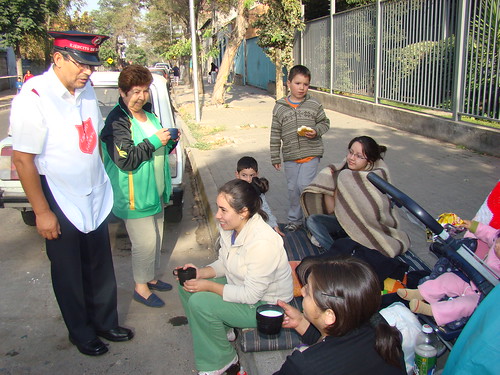 According to Salvation Army World Services Office (SAWSO), $55,758 has been donated to the relief efforts in Chile, via online, telephone, and text. The Salvation Army in Chile continues to adapt to the changing conditions while expanding its emergency relief response in both Central and Southern Chile. A curfew has been established from 6:00 PM until 12:00 PM the next day in the Concepcion and Talcahuano area in Southern Chile and cities closest to the epicenter. Salvation Army personnel have to have special authorization to travel during the tightly controlled curfew period. This authorization and assigning security personnel to Army staff members will allow safe travel during curfew and much needed distribution of supplies to those in need.

As the magnitude of devastation continues to escalate, Salvation Army officers, soldiers and volunteers continue to work feverishly to provide support and comfort to those affected. In Santiago, several young Salvationist professionals are reaching out and creating databases to facilitate more efficient registration of clients by social workers. Additionally, they continue to strive to make contact with the Christian media in the Santiago metropolitan region.

On Thursday, March 4, the Christian media held a fundraising campaign in 12 locations throughout the city to collect donations. These funds will be used to keep the media on the air. On Saturday, March 6, trucks were used to deliver the goods donated to Concepcion and surrounding areas, with the help of some TSA EDS vehicles.

The Salvation Army Corps in Concepcion is recognized for their League of Mercy ministry. The League of Mercy of the Hualpencillo Corps has stepped up to meet the needs and challenges caused by the earthquake and tsunami and are fully engaged in emergency response activities. Major Juan Carlos Alarcon, Divisional Commander of the Chile Southern Division, has arrived in Hualpencillo from Temuco. Major Alarcon had been given moving orders recently and was to have transferred this week, however, his leaving has been postponed.

As the Chilean Salvation Army works on the transition of officers and appointments, the Chilean government is also in transition. On March 12, the new governor of the country will be inaugurated. While many believed that the central region of Chile was not affected, many buildings in Santiago are now being condemned because of damage from the earthquake. The strong aftershocks which have reached up to 6.3 on the Richter scale have impacted the infrastructure of many buildings to the point where at least two to three 18 – 25 story apartment complexes in Santiago have had to turn their residents away and evacuate a five block radius so the buildings can be imploded in the near future. Many families have been displaced, and all socioeconomic levels are being affected by this disaster.

Salvation Army facilities have been severely damaged in both Central and Southern Chile. In the Central Division alone, the assessments were completed on Wednesday and damages are estimated at over $500,000. In South Chile, it is too early to have estimates in dollar figures although it is known some structures are now uninhabitable. A Boys home, serving 35 children operates in the coastal town of Llolleo. The administration, dining and kitchen areas are heavily damaged. This is a structure that has withstood over 60 years of natural disasters. Aftershocks continue to inflict damage on the complex. In El Faro, The Salvation Army has had to completely halt all services for fear of infrastructure collapse. This complex provided housing to college students whose hometowns are far from this community so they reside at The Salvation Army.

Lt. Colonel F. Bradford Bailey, Chief Secretary of The Salvation Army South America West explains that this has been a very deceiving earthquake. It initially did not show signs of catastrophic proportions, but seems to be breaking down the infrastructure from the inside out. Lt. Colonel Bailey also notes “this earthquake has not only caused physical damage but is has caused damage to the psyche and social conditions of Chile. It has brought out the best and the worst of Chileans. Many are very disappointed in their countrymen (i.e. looting, vandals), while others have stepped up to help and provide strength that is immeasurable.” He went on to say that “this is where The Salvation Army has an opportunity to step up to offer a ministry of presence, and many church members are finding a chance to share their relationship with God. This combined catastrophe will continue to not only affect the pocketbooks of the Government and its citizens, but also the soul of the Chileans.”

The Salvation Army set up a Chile relief fund and is accepting monetary donations. Donors may contribute $10 by text messaging the word “CHILE” to 52000, and confirming the donation with the word, “Yes.” Donors can also give via www.salvationarmyusa.org, 1-800-SAL-ARMY and through the mail at: The Salvation Army World Service Office, International Disaster Relief Fund, and PO Box 630728, Baltimore, MD 21263-0728 with designation “Chile Earthquake.”