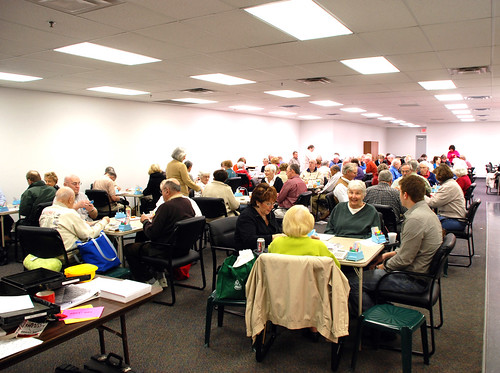 The Indianapolis Bridge Center charged an extra dollar per game for members to play during the week of January 24 through 30, and not because they were looking for a profit. Every extra dollar was donated to The Salvation Army’s relief effort for Haiti. The funds, equaling $815, raised in this week will go directly to Haiti to help bring much needed assistance to the earthquake victims.

Board of Directors Ron Hobbs thought of the idea to raise money for Haiti and it was quickly agreed upon by members. “Everyone wanted to do something [for the Haiti relief],” says club manager Sharon Austin.

The Indianapolis Bridge Center has at least one game going on every day and the members play for points, not money. The points are for recognition and everyone who played the week of the fundraiser earned extra points for playing.

Around 600 people participated in the fundraiser, some donating more than just the extra dollar required to play.

The Indianapolis Bridge Center often has charitable events such as this one to help in different causes. “Feel free to call on us in times of need,” says Austin.