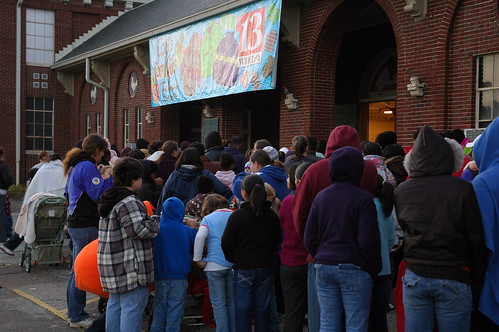 The line to get into the 23rd Annual Bob Gregory’s Coats For Kids stretched around the Northwest Pavillion, all the way to the 38th Street Entrance.

The 23rd Annual Bob Gregory’s Coats For Kids was easily the biggest yet as the line to enter the Northwest Pavilion stretched for blocks around the Indiana State Fairgrounds.  The poor economy has lead to a record increase in request for assistance including the need for coats.

The annual partnership between The Salvation Army, Tuchman Cleaners, and WTHR-13 is expected to give coats to more than 5,000 area children today.  The distribution day is the culmintation of 6 weeks of collections, cleaning, and set-up.

Also assisting in the efforts were Two Men And A Truck, the Indianapolis Colts, Store And Move, Burlington Coat Factory, and hundreds of volunteers.  With more coats needed than ever before, Walmart also stepped up with a last minute donation:  $5,000 worth of new coats.

“No one group could pull off something like this,” said WTHR retired weatherman Bob Gregory.  “This is a team effort dedicated to helping those who need it most.”  Bob has been a part of every coats campaign since it’s beginning 23 years ago.  “I’ve never seen a crowd like this,” he said.  “But I’ve also never seen a community respond like this before.”  Thousands of coats and thousands of dollars were donated toward the cause.

Setting for the distribution took a full week.  “It’s a lot of work,” said Julia Sipes, Salvation Army event coordinator.  “It’s all worth it when you see the smiles on the kids faces.”  You can see some of those faces in our photo gallery.