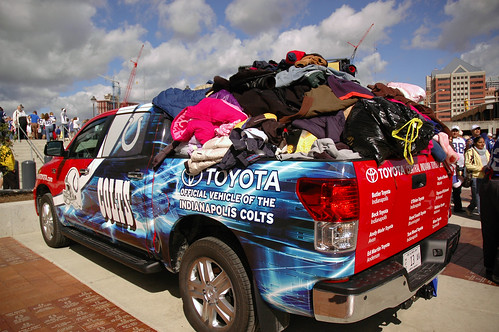 Colts fans showed their pride and their generosity today as they donated over 2,100 coats for the annual Bob Gregory’s Coats For Kids Drive.   Fans brought new and gently used coats with them to Lucas Oil Stadium for the Colts vs. Seahawks game.  They could also make cash donations which will be used later this week to purchase new coats for Coats For Kids.

Collecting the coats were the staff of WTHR, and Tuchman Cleaners, along with staff and volunteers from The Salvation Army.  Two Men And A Truck also assisted in the collections by delivering the coats to Tuchman’s for cleaning.

The Annual Coats for Kids distribution will be this Saturday, October 10 at the Indiana State Fairgrounds.  This is the 23 year for the program which brings coats to central Indiana kids in need.  Last year, more than 4,200 kids received coats through Coats For Kids, an increase of 15% over the previous year.  This year, the need is expect to be even greater due to the poor economy and a rise in unemployment.

There’s still time to help.  You can give a kid a new coat by making a donation online.  Or, you can take your new or gently used coats to any area Tuchman Cleaners through Monday, October 5.