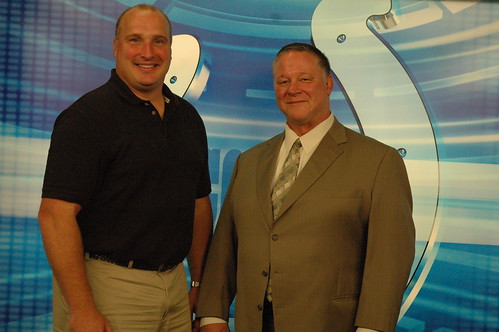 Each December, WIBC 93 fm hosts a three-day live fundraising event to benefit The Salvation Army. The 16th Annual Radiothon has a blue hue this year and will feature our co-chairs, Indianapolis Colts’ Tom Zupancic and WIBC/ESPN 1070?s Joe Staysniak. The ‘marathon of giving’ begins at 6 am on Friday, December 3 and ends just before the Colts kick it off with the Dalls Cowboys on Sunday, December 5, 2010.

Radiothon weekend is a lot of fun with Colts-themed prizes and touching stories of the men, women and children whose lives have been changed. But, it’s also a crucial part of funding the programs that provide financial and grocery assistance to struggling families, shelter for the homeless, refuge for women and children fleeing domestic violence, after-school and summer opportunities for metro Indy children, and support for Hoosiers after natural disasters.

So, what about those co-chairs?

‘Zup’ (pictured above, right) is in his 27th season with the Colts, his fifth as Senior Vice President of Sales and Marketing.   Before joining the front office as Director of Business Development in 1998, he served as the Colts’ Strength and Conditioning Coach. A graduate of Indiana Central University, Zupancic also received an honorary doctorate degree from Martin University in 2010. Zupancic was inducted into the Indiana Football Hall of Fame in 1998 and given the 1996 Sagamore of the Wabash, Indiana’s  highest civilian honor. In 2000, Zupancic was one of the 10 recipients of the Jefferson award for volunteerism. He serves on several boards, including The Salvation Army. Zupancic and his wife have three children and reside in Indianapolis.

‘Big’ Joe (pictured above, left) joined WIBC in 1996 after graduating from Ohio State University and completing a successful NFL career. An offensive lineman, Staysniak was a member of the AFC champion Buffalo Bills,  playing in two Super Bowls before finishing his career with the Indianapolis Colts. Staysniak is part of the WIBC Morning Show team and hosts his own show on ESPN 1070 from 10am-12pm, weekdays.  Staysniak proudly supports Emmis Communications’ community efforts, and has worked with The Salvation Army  on numerous occasions including the annual WIBC Radiothon. He and his family reside in Indianapolis.

Our co-chairs’ paths intersected at the Indianapolis Colts when Zupancic served as Strength and Conditioning Coach during Staysniak’s time as a player. They now host a Colts pre-game show along with Jeffrey Gorman and Wil Wolford, called The Heavyweights. The show, simulcast on 1070 The Fan and 97.1 Hank fm and airing on MyNDY, provides exclusive coverage and interviews about the Colts in the hours leading up to the game.

We’re thrilled to welcome these two Heavyweights as our 2010 WIBC Radiothon Co-Chairs. And we encourage you to join us. [check out the promo video] Corporate sponsorships are available starting at $500! We’re also looking for partners to donate prize packages for pledge incentives and for restaurants to donate meals to feed our volunteers and on-air talent who give their time to take pledges and encourage calls. Find out more at WIBCRadiothon.org or give Kristen a call at 224-1019.