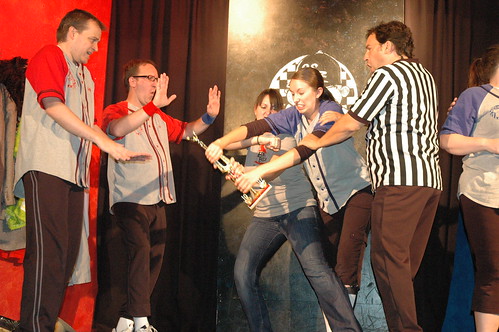 Mel McMahon and the Comedy Sportz team at the Homelessness Bites fundraiser, Sept. 30, 2010

It was a hilariously good time Thursday night in downtown Indy as the ComedySportz team, with special guest Mel McMahon, helped us raise money and awareness for Homelessness Bites. Lights, stage, sound effects and fast-paced improvisational comedy made for a fabulous evening laughing ourselves silly for a good cause.

Who knew that comedy was a sport? For those who have never been to a ComedySportz show, it goes like this: two teams made up of “actletes” compete for laughs and points as they make up scenes and songs on the spot. The audience makes all the suggestions and votes for the winners, and the referee calls the fouls. If you love “Whose Line Is It Anyway?,” then you’ll love ComedySportz! There are family friendly shows as well as those designed specifically for kids 12 and under.  For more information about upcoming shows and classes, visit indycomedysportz.com.

Mel McMahon is the spokesperson for Homelessness Bites, The Salvation Army’s campaign in the fight against homelessness.  After participating in the games, Mel shared with the audience about the plight of Indy’s homeless women and children and how the Army needs help to make a difference in those lives. To find out how YOU can be a part changing lives, visit homelessnessbites.org.