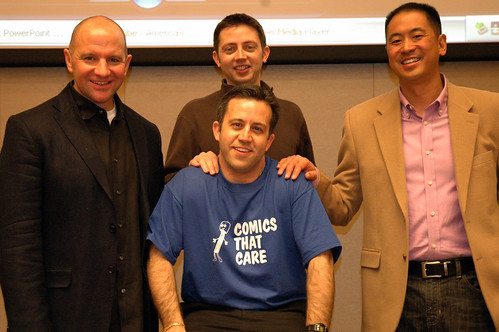 The Comics That Care: Auggie Smith, Mike Polites, Marques Bunn, and Stan Chen. Over 2 hours of laughter echoed through the IUPUI Campus Center as The Department of Communication Studies, the Communication Club, and the Salvation Army presented the 4th annual Comics That Care charity event to benefit Central Indiana’s Homeless Children. Some of the area’s funniest professional stand-up comedians donated their time, including the headliner, a Bob and Tom Show favorite, Auggie Smith. Smith, has been doing comedy for over 15 years and has been seen on Comedy Centeral . Other comedians performing were some of Indy’s funniest folks including: Stan Chen, Marques Bunn, and Mike Polites.

In addition to performing stand-up comedy, Polites is also a Lecturer in Communication Studies at IUPUI. Polites says that “as faculty members at IUPUI, we pride ourselves on getting our students to realize the importance of helping out the community. With all of the comedians graciously donating their time, proceeds from the comedy show will assist in bringing much-needed resources to the growing homeless population in Indianapolis. I’m so proud of the efforts that my students have put forth in coordinating this very special and very funny event. In these tough times, everyone can use a laugh.”