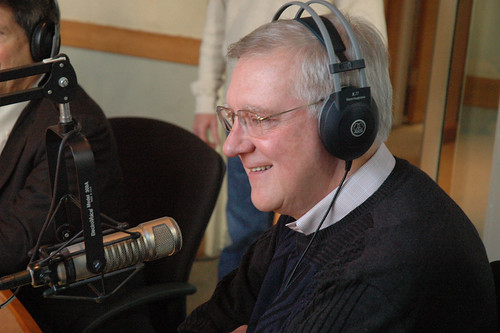 Don Steel in the studio of the Emmis Communications building for WIBC's Radiothon.

By 2:00 p.m. funds raised equaled $108,000 and the angels were in the studio today. At least that’s what the on-air personalities call the anonymous donors that matched all donations this morning.

Don Steel, president of Planned Investment Company, has been with Radiothon since it’s beginning in 1994 and was made a life member of The Salvation Army Advisory Board last year. “It’s tremendously rewarding,” said Steel about being a part of Radiothon.

“This is the worst economy I’ve ever seen,” said Steel. But he also notes the generosity of hoosiers who out gave so many other states during such tough times like the Hurricane Katrina disaster.

Sponsors have so kindly donated prize packages for those who donate. Some gifts include tickets to different sporting events in the area and Marathon gas cards. To see a whole listing of the different prize packages visit wibcradiothon.org.

During Radiothon donations are made by telephone at 1-877-71-PEACE or online at wibcradiothon.org. Cash donations and toy donations for The Salvation Army’s Kids Toy Shop will be taken outside the Emmis Communications building for the rest of the weekend.