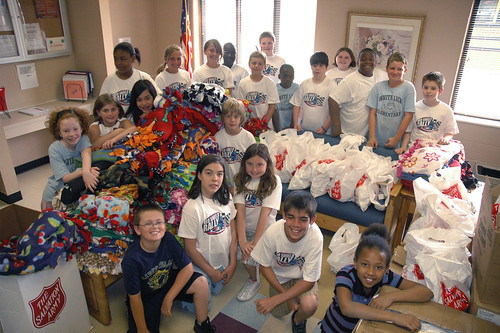 The fourth grade students from White Lick Elementary delivered their gifts to the shelter for women and children.

You can probably think of a lot of words to describe fourth graders, but for a fourth grade class from White Lick Elementary in Brownsburg IN, “hope” is the word that fits the best.

A few months ago, these students started learning about some of the issues facing their community and how they could help.  They were surprised that homelessness was a major problem in Indianapolis and shocked to hear that there were kids their own age who where homeless.  “They instantly wanted to help,” said their teacher, Emily Steffen.

The kids began seeking out ways in which they could help homeless children and they were put in contact with The Salvation Army’s Women’s and Children’s shelter in Indianapolis.  “We found out that these kids come to the shelter with nothing and that they didn’t have anywhere else to go,” said one of the fourth graders.  They wanted to give them something.  They wanted to give them hope.

The students called their project “A Call To Care” and began to brainstorm on what they could do to help the kids at the shelter.  They thought if they arrived at a shelter with nothing, something as simple as a blanket would give them comfort.  With the help of some Brownsburg High School students, they began making their own blankets for the kids at the shelter.

The blankets were the perfect idea for the kids, but how could they bring some peace and hope to the moms?  They came up with the idea to make “welcome kits” for these ladies.  The kits included hygiene products such as soap, shampoo, and conditioner which were generously donated by Gilchrist & Soames.

The ideas didn’t stop there.  “They’ve also been collecting and donating old cell phones to the shelter.  The shelter can turn these phones in for money,” said Steffen.  “Some of the phones are worth as much as $30 to the shelter.”

Today, Mrs. Steffan’s fourth graders brought over 100 welcome kits, over 60 blankets, and 261 cell phones to The Salvation Army’s shelter for women and children.  They also donated boxes and boxes of used clothing.  Pride filled their faces as they delivered hope to the residents at the shelter.  “I’m very amazed at what we were able to do,” said Reilly, one of the fourth graders.  “Kids can make a difference in this world,” she added.

After delivering their gifts, the students took a tour of the shelter and saw the rooms where some of the homeless children were living.  The experience was almost overwhelming for Shane Dotlich, one of the White Lick parents.  “Seeing this makes it real.  To think that this could be anyone of us.  I’m very proud of our kids,” she said.

And that is why “hope” is the only word that fits.  Because, while delivering hope to the women and children at The Salvation Army’s shelter, these students were also delivering hope to all of us.  Hope that this young generation understands what it means to care and give back, and hope that our future is in good hands.

See photos of “A Call to Care”