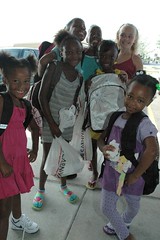 Children from The Salvation Army's Eagle Creek Community Center with their new shoes and backpacks.

Hard to believe, but soon our streets will be lined with kids waiting for those yellow buses to carry them off to school. Yes, it’s that time of year again – back to school. It’s a time of anticipation for some, excited to know who their teacher will be and which of their friends will join them in the same classroom for the year. But for many Hoosiers who are  struggling to make ends meet, preparing for the first days of school puts an even greater burden on them. In fact, many children will start school without the basics, such as backpacks, supplies and tennis shoes.

Such is not the case for nearly 120 children from The Salvation Army’s Summer Day Camp programs in Indy, thanks to the generosity of long time Salvation Army donor, Mrs. Laura Lewis. These children, assisted by Salvation Army staff and volunteers, went shoe shopping at the Shoe Carnival on Lafayette Rd. in Indianapolis before also receiving backpacks with school supplies. Many of the children at the event are residents of The Salvation Army’s Shelter for Women and Children and have been left homeless due to economic issues or even more serious situations such as domestic violence. In addition, most of the kids come from single-parent families with that parent working to support the family and also need other assistance from the Army such as for groceries and utilities.

Mrs. Lewis, who is now 94 years old, has provided shoes for children through The Salvation Army for five years. She was an orphan as a child and never had new shoes for school. After enjoying a prosperous life together with her husband she wanted to give back to kids who may be less fortunate. Kalvin Henderson, proud recipient of Mrs. Lewis’ gift said, “I think she’s real nice and someone should be doing something nice for her too. I’d have to save my money for a long time to get shoes like this.”

Jo Ann Remender, Planned Giving Director for The Salvation Army says, “It’s not just meeting a physical need for these kids, it’s meeting an emotional need too. It’s preparing them for that first day of school, so they feel like they have all the necessary tools they need to be successful.”