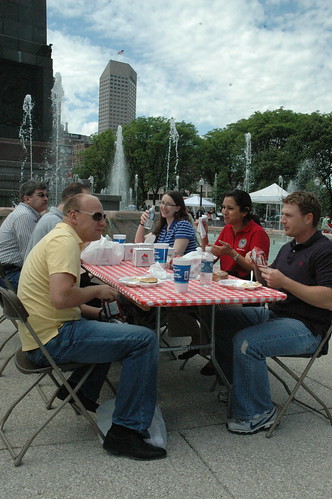 As part of the Homelessness Bites campaign, a campaign to raise awareness and money for Indianapolis’s homeless, The Salvation Army put together the second annual Eat Outside the Box event. A lunch was served from 10 a.m. until 2 p.m. Friday, May 14 at the Veteran’s Memorial Plaza. Numerous people had the $5 lunch which included a hamburger or hotdog, chips, coleslaw and a drink, while 67 homeless persons ate for free.

About 7,500 Hoosiers in Indianapolis are homeless each year. Many times these individuals are single mothers and their children. The Salvation Army provides for homeless mothers and their children at the Women and Children’s Shelter in Indianapolis. Julia Sipes, special events coordinator for the shelter, says that raising money for the Homelessness Bites cause “means they (shelter residents) can eat. Every cent helps.”

Sipes says that a major benefit of The Salvation Army’s Women and Children’s Shelter is that it’s a safe haven. Some of the women and children at the shelter are escaping domestic violence. The shelter provides more than just a bed, but also life skills classes that include parenting courses, nutrition courses and guest speakers.

Homelessness Bites spokesperson Mel McMahon was looking for a way to help others when Jeff Stanger, Development Director of The Indiana Salvation Army, asked her to join the Homelessness Bites campaign last August. “I could not turn it down,” says McMahon.

One of McMahon’s main focuses for the Homelessness Bites campaign is to reach out to young people and make them more aware of the services that The Salvation Army provides.

Volunteering their time and providing music for the event was Band Wagon. The band is a familiar participant in these events, performing at The Salvation Army’s Apple Fest event last October.

“It’s just a great honor for us,” says Band Wagon singer Lisa Kopczynski. “We’ll do it every time they ask us to.”

There were many supporters and participants in this year’s Eat Outside the Box. Hot dogs, hamburgers and chips were provided by All-American Picnic Company and GFS Marketplace, and drinks were donated by Ricker’s Stores and Noodles and Company. Other participants included Two Men and a Truck, ampm, ChaCha, 107.9, WISH-TV, Ivy Tech Community College, Comcast, Avon, Indy Star, The American Legion, The Indianapolis Colts, The Indiana Pacers, Indy Custom Cornhole and HVAF.