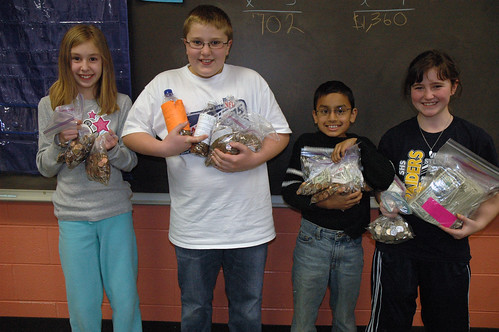 Students from Shenandoah Elementary School presented The Salvation Army with over $5,600 in donations.

In a weeks time, students at the Shenandoah Elementary School in Middletown, Indiana raised over $5,600 for The Salvation Army’s Disaster Services Relief for Haiti through their fundraising campaign Drinking Water for Haiti. At noon Feb. 3, 2010 at Shenandoah Elementary, the students presented the funds to The Salvation Army’s Major Brenda Pittman and Development Director Jeff Stanger.

Drinking Water for Haiti was put into affect by every teacher in the school buying enough water bottles for each student in their class. The students were allowed to drink the water in school and were reminded when they drank that the people in Haiti didn’t have this luxury.

The students took their empty water bottles home to be filled with spare change and cash, then returned with the water bottles to school. The result was a generous donation to The Salvation Army, who takes 100 percent of their raised funds to be added directly to the relief effort.

Amber Kinsey’s fourth grade class raised the most, a grand total of $387. “We were just floored,” said Kinsey about the amount they had raised.

Another fourth grade teacher Laurie Boykin headed the fundraiser. She’s been to Haiti before on mission trips and really felt compelled to help after the earthquake. She never thought that the fundraiser would be so successful.

Thanks to the teachers and students at Shenandoah Elementary, and a special thanks to First Merchants Bank who it took three hours to count out all the change, Haiti will be receiving much more needed assistance.

Shenandoah Elementary has been active with The Salvation Army’s causes before, by ringing bells and adopting families during the Christmas season.