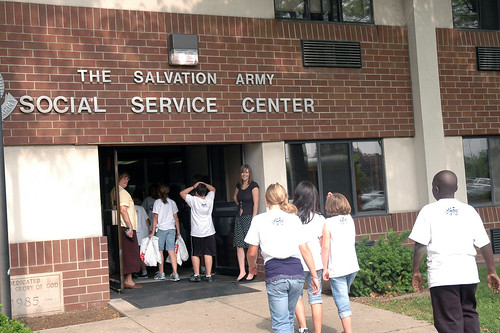 Many families faced with unemployment, health issues, eviction and other symptoms of the lagging economy have been given a chance to move forward in their lives with the assistance of The Salvation Army and recent funding awards from the CERF (Community Economic Relief) program. “Funding has been limited for programs  all across the city, but thanks to the additional CERF monies we have been able to provide assistance to more families in need for a little longer,” said one caseworker at The Salvation Army’s Eagle Creek Community Center.

This week, The Salvation Army was awarded $40,000 in funding for programs and services that are helping keep families afloat during tough times. Without this additional award  from the CERF program, the Army would not have been able to help several families stay in their homes, keep their utilities on or further their education to obtain better jobs.

One example of a family that the Army was able to assist due to this additional CERF money is a couple who had previously been well established and financially comfortable. For more than a year, they had been struggling to make ends meet.

Their struggle first started when “Tony” was laid off from his position as printing press operator. He patiently waited before he began to look for a new job because his former employer promised him on three occasions that he would be called back to work.  When he realized that promise would not be fulfilled he began looking for another job as a printer.  Unfortunately, he was unable to find a job in his field.  He became even more worried as the expiration date for his unemployment benefits quickly approached.

Finally, Tony found a new job as a driver, but before he could begin working he was required to pass a test to obtain his CDL license.  Just a short while ago, paying the $100 fee for the test would have been no problem at all for Tony and Linda, but after an extended period of unemployment they no longer had the spare money they needed for Tony to start his new career.  To make matters worse, they had also gotten behind on paying their energy and mortgage bills.  They had a tough decision to make – pay what they could on their bills or gamble on the future by paying the CDL testing fee now and hope that would allow them to catch-up on their other bills later.

Luckily, someone heard about their struggle and referred them to The Salvation Army.  Linda explained their dilemma to their case worker.  Without the CERF program, their case worker would have only been able to help them with their bills in a very limited capacity. However, thanks to the CERF safety net, our case worker was able to give them the level of support they needed to remain housed and to keep their lights on. As a result of this basic needs assistance, Tony was able to overcome the financial barrier that had been holding him back from obtaining a job which would ultimately lead to financial security in their future.

In the words of our case worker, “So, hooray for CERF!  …  She (Linda) just left our office with a big smile on her face and some hope!”

There a number of other stories of success through The Salvation Army’s Corps and Community Centers in Indianapolis. According to the case worker at our Eagle Creek Community Center, the CERF program “has truly been a godsend. Because of it, we have been able to help more people. Lately, several of our clients have been under-employed and we have been able to keep them in their homes.  Of course, a great many are looking for jobs.  One client is a part-time employee of Indianapolis Public Schools and attends Martin University to obtain her GED.  She is planning to learn stenography and office skills which will eventually result in her becoming a gainfully employed tax payer, contributing to the community.  A couple of clients are trying to get permanent disability so they can receive Social Security and be able to support themselves.”

At our Social Service Center many of the women we assisted through the CERF program last month were able to find employment or enroll in job readiness or educational programs. We were able to help transition 18 families into stable housing and continue services with case management and support groups.

At our Fountain Square community center, we were recently able to assist two families which were on the brink of being evicted due to medical and loss of employment situations.  We were able to help them stay in their homes for at least the next thirty days so that they could get back on their feet and recover.  Due to their large past due balances, we normally would have been unable to assist them. However, thanks to the CERF program we were able to help. Many of our clients’ bills, due to stalled unemployment benefits, a reduction in pay, and other factors, are just beyond their current capacity to pay which makes the CERF a tremendous blessing.

Clients and caseworkers both have expressed how thankful and appreciative they are for the assistance they have received.  The CERF program was set up in 2008 as a local relief fund with $3.2 million  to be used by frontline community centers, faith-based organizations and homeless prevention providers who are “first responders” in helping people deal with the worsening economy. Those funds have now been depleted without any commitments for 2011 to replenish.