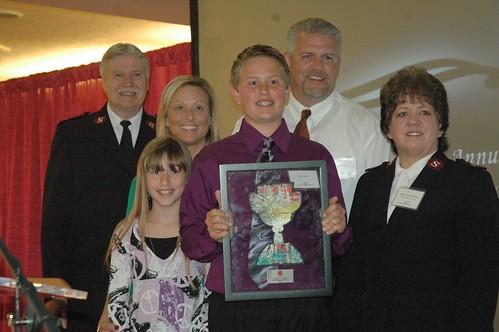 Jake Iery and his family pose with Majors Keith and Sherrie Welch. Jake won the Youth Champion of the Year Award.

There were champions among us this past Wednesday evening, at the First Annual Salvation Army Victory Dinner held at Riverwalk in Broad Ripple. Attendees gathered on this beautiful evening to celebrate the efforts of a few fine citizens and businesses who had sacrificially earned that title through a variety of ways. Focusing on the 2009 Christmas season, these volunteers and supporters of the Army’s programs really were what made this year’s Tree of Lights events successful. In spite of not reaching the monetary goal, countless lives were significantly touched by these people and their service. Keeping in mind the mission of The Salvation Army, it was an honor to recognize these special individuals for meeting human needs on behalf of the Army.

Major Richard Amick, Indiana’s Divisional Commander, started off the evening with some encouraging words while directing our attention to the many ways the Army has been blessed this past year. This was followed by a video, “A Year in Review” highlighting the Army’s work throughout 2009.  Continuing with the theme of “The Power of One”, inspirational speaker for the Colts, Josh Bleill gave an outstanding talk. Bleill, an ex-marine who lost both legs from an explosive device while serving in Iraq, uses his experiences as a platform to share with others about how they too can make a difference.

Saving the best for last, the night culminated with the presentation of awards to the champions, whose hard work served men, women and children. Of special interest was Zionsville Middle School student, Jake Iery, who was recognized as Youth Champion of the Year. Learn more about what Jake did for children in need on the volunteer blog, www.savolunteer.org/. Also honored individually was Iris Bouchez, as Volunteer Champion of the Year, in addition to Northwest Kiwanis Club, Two Men And A Truck, Reach USA/ValPak and Response Church. Salvation Army staff was excited to be able give each award recipient a specially handmade plaque, created by some of the kids who reside at our Women and Children’s Shelter.

If you’d like to join the ranks of champions and/or for more information, call Elizabeth Wilhelm- Volunteer Coordinator at 224-1010.