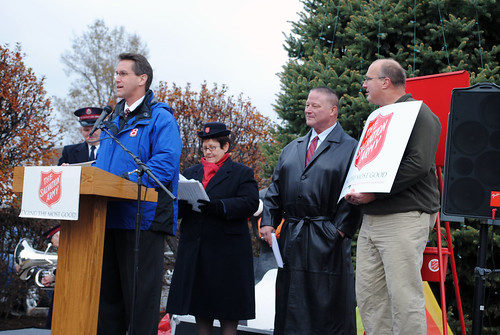 Congratulations, Central Indiana!  You did it!  Today, The Salvation Army is happy to announce that it has reached it’s 2010 Tree of Lights Goal of $2.93 million.  “We continue to be amazed and grateful for the generosity of the people of Central Indiana. With the need being greater than ever, they stepped up and gave through the Salvation Army to help their neighbors. We have a clear mission ahead: to do the most good with the resources entrusted to us,” said Jeff Stanger, Development Director for The Salvation Army.
Last year, the Army fell short of its annual goal by nearly $300,000 causing the organization to dip into its strategic cash reserve in order to continue services.  As of January 4, The Salvation Army was still $468,925 short of this year’s $2.93 million Tree of Lights Goal.  That day the Army made one more public appeal for funding and over the last 2 weeks the central Indiana community has responded, pushing the charity to its goal ahead of the January 31 deadline.

In 2010, because of the generosity of central Indiana donors, The Salvation Army served more than 1,400 people struggling with substance abuse, provided more than 79,000 safe nights of shelter for women and children fleeing domestic abuse and homelessness, served more than 202,000 meals to men, women, and children in need, and provided a safe environment for hundreds of area children to go after school.  Now, those same donors have made it possible for The Salvation Army to serve those in need in our community in 2011.