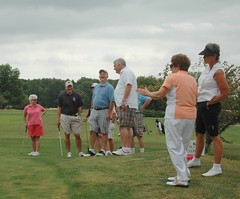 Salvation Army Indiana Divisional Commander Richard Amick joins others in a putting contest at the Golf Club of Indiana for the 2010 Golf4Giving Open.

After the longest stretch of 90+ degree heat, you could not have asked for better weather on Wednesday, for the Golf4Giving Open.  Held at the Golf Club of Indiana on the edge of Lebanon, this annual event is organized by The Salvation Army Women’s Auxiliary, offering teams of four the chance to experience  Indiana’s best golf courses while raising much needed funds for the Army’s services here in Indy.

Marsha Patton, President of the Women’s Auxiliary said, “All the money raised goes back into the central Indiana community so that we can continue to do the most good for those in need.”

In its 12th year, the event had an incredible response this year with over 100 golfers making up 23 teams.  The Women’s Auxiliary, made up of officers, volunteers and Advisory Board members, worked through the breezy morning setting up the venue for registration and two meals which were provided by Applebee’s and Bravo! Italian Kitchen.

Many participants in yesterday’s event have been long time supporters of The Salvation Army. WISH-TV’s Daybreak anchor Scott Sander and host of this year’s open, was one of those who came out to help raise funds. “I know this one originally as a women’s only event, but I think I speak for all of the guys when I say it’s terrific that they opened it up for all of us.”

Starbucks generously provided a jumpstart to everyone’s day with a donation of coffee and then if twas off to 18 holes, 2 red kettles and a pair of golf pro’s at either end of the course to take your shot for $5 if you chose.

Last year’s open raised over $23,000 and considering the growing need for social services and assistance in Indiana, we’re hoping that this year’s totals will go beyond that.  “It was a fantastic time – the skies couldn’t have been more cooperative and I was thrilled to be a part of it,” said Scott Sander.

If you’d like to know more about Golf4Giving or see photos from this year’s event, go to www.golf4giving.org.