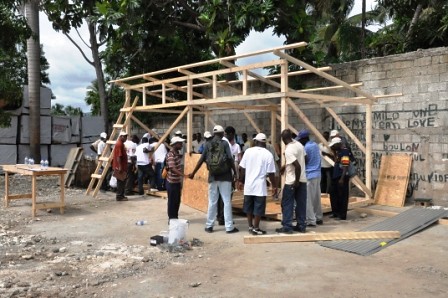 Salvation Army workers construct a temporary shelter for those still displaced by the January earthquake.

The Salvation Army will complete the construction of 600 housing shelters through the Transitional Shelter Program in Jacmel, Haiti this week, to assist in relocating earthquake-displaced Haitians back to their home communities. Over the past six months The Salvation Army has transitioned from providing for immediate needs, including temporary shelter, food, water and medical attention to providing long-term recovery services to help return survivors to a level of normalcy in their lives. The long-term rebuilding process has employed more than 400 Haitians as carpenters and construction crew-members to assist in reconstruction efforts.

“The level of care and steps taken to rebuild Haiti has been astonishing, with this transitional housing project highlighting the significant strides everyone has made over the past six months,” said Lt. Colonel Dan Starrett Executive Director of The Salvation Army World Service Office. “Housing shelters have been built in some of the most heavily impacted areas in Haiti, including Jacmel, Bainet, Lilette and Bellami. The Salvation Army has had a major presence in Haiti since the 1950s and we’ll continue to provide earthquake relief services for as long as the need is there.”

“For the safety and well-being of the thousands of Haitians who have been displaced, it was critical that we constructed these homes as quickly and strongly as possible with the hurricane season here,” said Lt. Colonel Starrett. “The ultimate goal of our emergency service in Haiti is to provide the resources for the community to return to self sufficiency at a level that exceeds conditions before the earthquake. These homes are the first steps of many in that direction.”

Following the construction of the 600 shelters in Jacmel, which began on June 5, The Salvation Army will work with government officials in Haiti to plan the second phase of development for an additional 500 homes in Jacmel and another 1,000-1,500 homes in Petit-Goâve, which felt a strong 5.9 magnitude aftershock on January 20. The quake’s epicenter was almost directly under Petit-Goâve, severely damaging the city. Each home will take one day to complete, with each costing approximately $1,800. Like in Jacmel, the homes will be built on existing home sites. Individuals and families who have lost their homes due to the earthquake must own the property on which their new home will be built in order to obtain a shelter. Families are helped first, followed by single women with children and other vulnerable populations.

Locally, The Indiana Salvation Army sent down some of the first response teams following the January earthquake (https://toteboard.wibcradiothon.com/2010/local-response-team-heads-to-haiti/).  The support of Hoosiers for The Salvation Army’s relief efforts was overwhelming.  “We are proud of Central Indiana’s response to the crisis in Haiti.  Hoosiers donated nearly $400,000 to Haitian disaster relief and today’s news shows that their investment has produced tangible results. The effort continues both in Haiti and in Indianapolis to rebuild communities and restore lives. We want to express our thanks to all Hoosiers who have contributed and continue to support our mission,” said Jeff Stanger, Development Director for the Indiana Salvation Army.

The Salvation Army set up a Haiti relief fund and is accepting monetary donations. Donors may contribute $10 via their phone bill by text messaging the word “HAITI” to 52000, and confirming the donation with the word, “Yes.”  Donors can also give via www.salvationarmyusa.org, 1-800-SAL-ARMY and through the mail at: The Salvation Army World Service Office, International Disaster Relief Fund, P.O. Box 630728, Baltimore, MD 21263-0728 with designation “Haiti Earthquake.” To date, more than $20.5 million has been donated to The Salvation Army to assist in the development of the housing units, provide 5.4 million meals, as well as other immediate and long-term recovery services in Haiti. Through the shelter campaign, The Salvation Army will continue will provide over 4400 shelters in the next 6-12 months in Jacmel, Petit-Goâve and Port -au-Prince.

Prior to the earthquake, The Salvation Army in Haiti operated schools, clinics, a hospital, feeding programs, children’s homes and church-related activities through some 60 Corps community centers across the country.  One Salvation Army facility in Port-au-Prince includes a home for more than 50 children; a school with a daily attendance of 1,500 children; a medical clinic caring for 150-200 people daily; and a church that on any typical Sunday welcomes nearly 1,000 people.

Since January 12, The Salvation Army, along with the United Nations, local governments, and nongovernmental organizations has cared for the 20,000 individuals who have been displaced from their homes, living at a soccer field adjacent to a Salvation Army facility in Port-au-Prince. To establish a safe environment, a Camp Security force has been formed made up of 45 Haitian members from the camp itself. The team has been trained in security techniques by The Salvation Army and the United Nations. Medical care and nutritional services are also being provided to meet the needs of all individuals at the camp; including water purification units that supply 20,000 – 30,000 gallons of purified water or 4.2 million gallons of water daily.