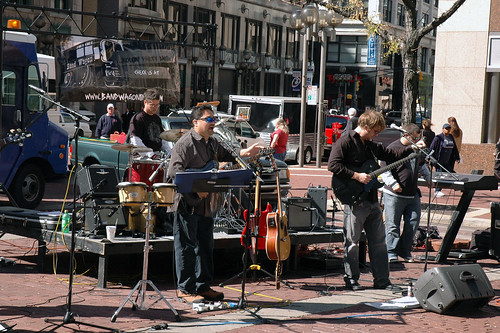 Bandwagon will be on stage at Apple Fest 2009. Awesome!

Plans for this year’s annual Apple Fest are well underway. Last October, at the 5th anniversary of the event, we had a record turnout, beautiful weather, and plenty of cobbler. And the impact we were able to make on homelessness awareness for Indianapolis was astounding.

Lucky for malophiles*, the event is looking to bigger and more delicious than ever. Bandwagon has signed on to come back and deliver the audible goods for Apple-Festers. Applebee’s is promising a fantastic menu for lunch. Adrian Orchards is hauling in some wonderful varieties from the harvest. And, we will also welcome a new media sponsor: Emmis Communications and all 4 of their Indy stations – WIBC, HANK, B105.7 and The Fan.

So, mark your calendar, send out a tweet, rsvp on Facebook, or just stand on your porch and shout it out at the top of your lungs. Apple Fest is October 1, from 10:30 to 1:30, on Monument Circle, and your very best way to eat in the street so the hundreds of homeless kids in Indy won’t have to.

Find out more and the latest at HomelessnessBites.org.

* – a malophile is someone who loves apples (and cares a great deal about homelessness.)