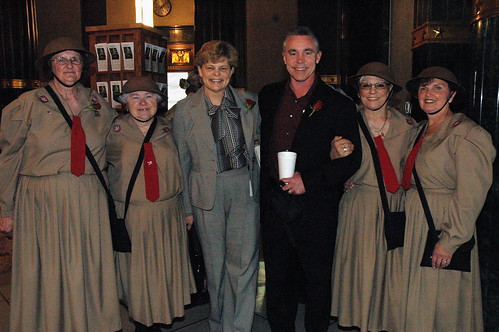 Over 90 years ago a group of women from The Salvation Army went to care for American soldiers in France during World War I. These inventive women used the little resources they had to bring some hope to the frontlines. Sugar, flour, eggs, baking soda and powdered sugar were in their limited supply of goods. Not the right ingredients needed to create a feast, but rather a treat and gesture of kindness. They made doughnuts with these ingredients and passed them out with coffee among the soldiers, who started calling them the Doughnut Girls. The name stuck.

The service of these women was remembered at the Indiana War Memorial Tuesday, May 11 – not for serving doughnuts or hot coffee – but for their goodwill. The Doughnut Girls were honored by an exhibit and guest speakers, as part of National Salvation Army Week.

Among the guest speakers were Divisional Commander of the Indiana Salvation Army Major Richard Amick, Executive Director of the Indiana War Memorial Brigadier General J. Stewart Goodwin and Indianapolis Mayor Greg Ballard. The exhibit included the tools used to create the doughnuts in the rough war conditions. Also in the exhibit is a manikin dressed in the traditional gear of the Doughnut Girls that illustrated a look of long ago that symbolized compassion and home for many soldiers.

General Goodwin spoke to attendees at the dedication explaining that the story of the Doughnut Girls was one that Hoosiers needed to know, saying “I give you my pledge that we will help you tell that story.”

The legacy of the Doughnut Girls can be traced to Indiana. Helen Purviance was an Ensign of The Salvation Army and a Hoosier among the first to be sent to France. As the well-known quote from Ensign Purviance goes, “I was literally on my knees when those first doughnuts were fried. There was also a prayer in my heart that somehow this would do more for those who ate the doughnuts than satisfying a physical hunger.”

Another Hoosier Doughnut Girl was Isabella Blomgren. After returning home from war, Isabella married Nils Bonger and decided to continue serving with The Salvation Army as an officer.

Major Poff’s father, retired Salvation Army service extension employee Glenwood Davis, calls the Bonger officers his “family unrelated.” Davis is an only child and was very close to the Bonger’s son growing up – also an only child. They were like brothers.

General Goodwin has decided to make the Doughnut Girls Exhibit permanent saying “it’s a tremendous opportunity to tell the story of both sides.” The story of a Hoosier and the story of The Salvation Army.

Check out this video about the Indiana Doughnut Girls

Check out photos of the exhibit dedication