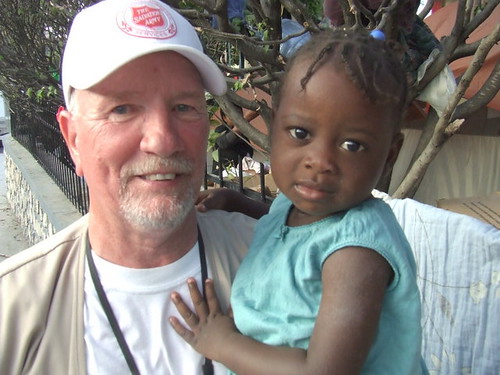 It will soon be one year since Jerry Larsen, Salvation Army Indiana Disaster Services Director  returned home to Indiana after serving post-earthquake in Haiti. The Disaster Response team left Indpls. International Airport PAP bound only one week after the earthquake,  with the assignment of serving a 2 week rotation in Port au Prince.  They returned to their spouses, children and grandchildren on Valentine’s Day. I remember the emotions they brought back with them, both evident in their words and on their faces. It was a time of living and working closely with the desperate, hungry, injured and dead. And it was the team member’s urgently needed skills that kept them amongst the Haitian people for nearly 4 weeks.

Once again those skills are being summoned to assist with The Salvation Army’s ongoing efforts in Haiti which have progressed into the next phase deemed “reconstruction and rebuilding.” Jerry will drive to Chicago Monday morning to meet with territorial leaders before flying out for Haiti on the 8th of February.

Since the earthquake last January, The Salvation Army has  continued serving thousands of Haitians, in many different ways. One way that this new phase seeks to make an ongoing difference is to provide housing. Jerry will be leading a team to construct several small houses for families near Jacmel. “The houses we build are meant to be permanent, but TSA has been building temporary housing in several areas over the last several months. I believe there are about 7 to 800 of those completed now and the goal is 3,000 over the next couple of years.”

When I asked Jerry if there was anything he was looking forward to, upon returning to Haiti, he answered, “I am looking forward to the possibility of seeing some of the people I met while I was there last year. Maybe even seeing the little one that is in the photo on my Facebook page.  Needless to say, I am looking forward to a successful mission by completing the work we plan to do there. I try to have a positive outlook on all of this, and know that there is only so much we can do. I think of one person or family at a time that we are able to help.”

As a team, they are taking along some items to give the Haitian people, such as school supplies, toys and some clothing. Summing up his mission, Jerry added this, “As I have said so many times, it is not about me or the team…it is about helping those in need.”