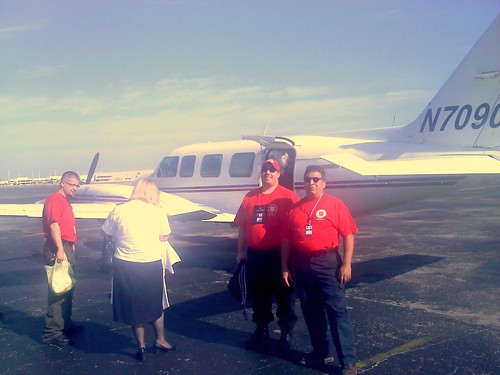 Captain Marcos Ramirez (far right) boards the plane that carried him to Port-au-Prince.

Captain Marcos Ramirez, part of The Salvation Army Response Team from Indiana, arrived in Port-au-Prince Haiti last night.  He was able to get the following message out today.

We arrived late last night and were met in the grass by guards, volunteers, and trucks to get our gear and personnel in. At the same time we arrived there was a group on its way out for medical reasons. The trip to the hotel where we were housed for the night was not the best to log to memory. It was obviously dangerous and tempting for the many bandits on the street. Even through dark, the devastation was visible and all around us. There were more buildings down than up. We spent the night being briefed and catching up on sleep so we could get up early to make our way to the compound where The Salvation Army DHQ and Children’s Home is. The destruction and loss of life is obvious from the smell of the dead bodies still in the shattered buildings. The spirit of the people, even through translation, is desperate. We are not an unseen force. We are recognized wherever we go and the people are all expecting our help. The conditions are as bad as you can imagine and hope is needed. The Salvation Army compound is adjacent to a soccer stadium which has been destroyed but the field is quickly becoming a tent and shanty city. The gangs and the pressure from them is very present. They are a major part of the danger. We will know more soon. We need to work.

We will continue to follow the progress of our team as they serve Haiti.  They ask for prayers and support as they minister to the victims of this tragedy.