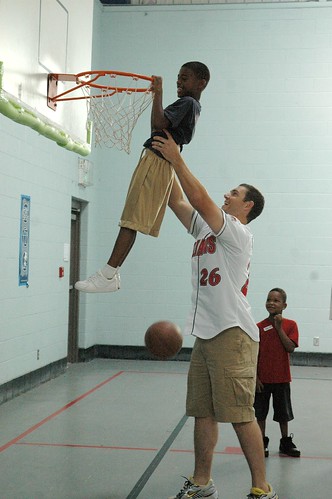 What could be better than playing basketball in an air-conditioned gym on a hot summer day?  How about playing basketball with a professional baseball player?  Jeff Clement, first baseman for the Indianapolis Indians, spent the morning playing and hanging out with the kids at The Salvation Army’s Eagle Creek Community Center.  “Today was a great opportunity to come down to The Salvation Army and spend time with these kids.  It’s more fun, than anything because I’m just a big kid myself,” said Clement.

The kids are all part of The Salvation Army’s Summer Food Program, which provides nutritional meals for at-risk youth in the Eagle Creek area.  “For some of the kids here, this is the only full meal they get during the day,” said Captain Leti Crowell, Corps Officer for The Salvation Army Eagle Creek.  The program was started to bridge the gap between school sessions.  Nearly all of the children qualifiy for the Federal School Lunch program and many would go without a quality meal this summer without the help of The Salvation Army.

A big part of the day is organized recreation and when Clement heard about the opportunity to go and play with the kids, he jumped at it.  “It means so much to these kids that a player like Jeff Clement of the Indians cares about them enough to take time out of his schedule to come and play with them for a few hours.  These kids aren’t just hungry for food, they’re hungry for attention.  They’re going to go home after this and talk about it for a long time,” said Captain Crowell.

This is the second year that players from the Indianapolis Indians have spent a day with the kids at the Eagle Creek Salvation Army.  Last summer, Indians pitchers Eric Hacker and Chris Bootcheck played whiffle ball with kids.