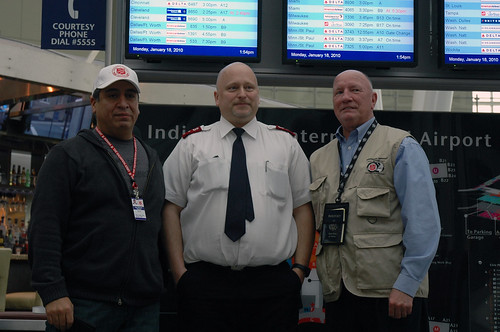 Captain Marcos Ramirez, Captain Geff Crowell, and Jerry Larsen of the Indianapolis Salvation Army will be in Haiti for 2 weeks.

The Indianapolis Salvation Army sent its first Disaster Response team to Haiti today.  The 3 person team flew out from Indianapolis International Airport at 3:25 PM for Fort Lauderdale, and will fly to Port-Au-Prince tomorrow.  They will be part of a national Salvation Army disaster team that will respond to the overwhelming need in Haiti for the next 2 weeks.  A new team will relieve them on January 30 and they will return on January 31.

The local team is made up of Salvation Army Disaster Service Director – Jerry Larsen, and Salvation Army Officers – Captain Marcos Ramirez and Captain Geff Crowell.  Internationally, Jerry Larsen is one of The Salvation Army’s most highly trained disaster response people.  He has served at 9/11 in New York, Iraq, Sri Lanka, and numerous other response operations.  In Haiti, Jerry will take on an administrative position while Captains Ramirez and Crowell will be assigned to hydration and, spiritual and emotional care.  All three men have extensive disaster service experience and training.

This will most likely be the first of several Salvation Army response teams from Indiana.  “The devastation is so vast, and the need is so great, that The Salvation Army will be providing aid for many months to come,” said Larsen.  National and International teams will continue to serve on 2 week tours for the foreseeable future.