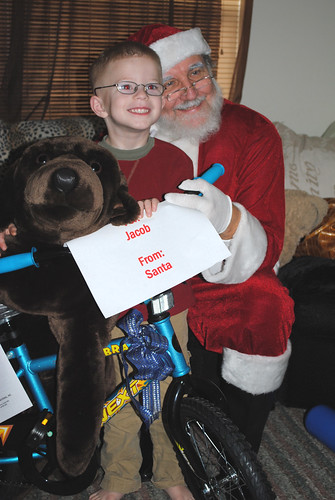 4-year old Jacob gets a new bike from Santa.

By 9am on Christmas Eve, Santa’s sleigh was warmed up and on the road to deliver  Christmas surprises to three unsuspecting children. Driven by elves from Two Men And A Truck and followed closely by a news crew from WISH-TV, Santa’s mission was to pay a visit to Makayla, Jacob and A’joni of Indianapolis for a special delivery of  bicycles from The Salvation Army. Each Christmas, we’ve been fortunate enough to be able give bikes away to many children during Toy Shop in addition to the later deliveries – thanks to a donor and donations made to the Angel Tree collection. Approximately 130 bikes were given away this year.

Four year old Jacob and his twelve year old sister Makayla were first on Santa’s list. It was a heartwarming moment when Jacob answered Santa’s knock at the door and came running out to his new bike with a “Wow!”. Though his sister Makayla was too shy to mingle with the living room full of staff and camerman, Jacob made us all feel welcome and enjoyed sitting on Santa’s lap for a chat. His mother Kelly was thrilled to see his excitement. “I wasn’t expecting all this. This is wonderful! It’s such a big help.” Jacob happily shared a brownie with Santa and I have a feeling we could’ve stayed all day listening to him tell us about his favorite toys.

After leaving Jacob and his new stuffed dog “Bob”, it was onward to the Eagle Creek area to the Mason home where 9 year old A’joni grinned from ear to ear when we arrived with his bike. With quiet manners, A’joni hugged and thanked Santa but also let his mother know that he wanted her to share the brownies we brought. Of course, everywhere that Santa goes kids light up and take notice. As we left, some nearby kids came out to greet him and he was gracious enough to take the time to wish them all a Merry Christmas.

We’d like to thank Two Men And A Truck for making Christmas possible by handling all of the logistics and moving during the holiday, Bg Kahuna for pumping up the volume and bringing that “Olan Mills” quality to our photos during Santa’s deliveries, the donors and supporters for funding our bike shopping sprees and of course…Santa. We couldn’t be the ones Doing the Most Good without all of you!