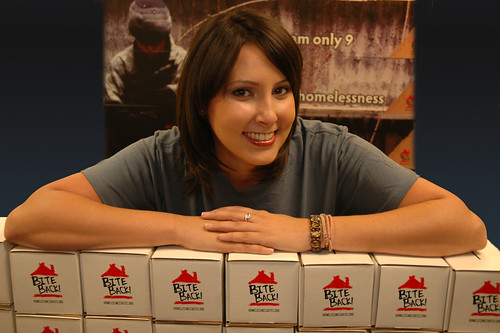 Mel McMahon will be the official spokesperson for The Salvation Army's Homelessness Bites Campaign.

The Salvation Army is pleased to introduce Mel McMahon as the official spokesperson for our Homelessness Bites campaign.  Mel will lend her on-air talents to one of The Salvation Army’s largest programs in Central Indiana.

Mel is best known for her work on FOX 59, WIBC, and HANK FM.  A graduate from Indiana University, Mel is currently pursuing her MBA with a concentration in Public Affairs Management.  “My main goal as spokesperson is awareness.  It’s women and children, moms and dads, who are being affected by homelessness, not just the people we may see on the street or around the Circle,” said Mel.

Over 30% of the homeless in Indianapolis are single moms with two or more children under 10 years old. The funds raised through Homelessness Bites will be used to offer housing assistance, resources and support to moms and children find themselves homeless due to a financial struggles and domestic violence.

One of Mel’s first official appearances will be at the 6th annual Apple Fest on Monument Circle.  The annual lunchtime event supports the Homelessness Bites campaign and features, live music, hot apple cobbler, and lunch items from Applebee’s Restaurant.  The event will be held on Thursday October 1, from 10:30 AM until 1:30 PM.  For more information about Apple Fest, Homelessness Bites, and Mel McMahon, visit HomelessnessBites.org.