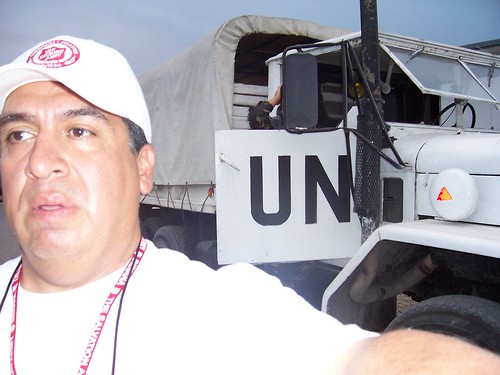 Captain Marcos Ramirez with the UN troops which are essential to food and water distribution.

Captain Marcos Ramirez is part of the Indiana Salvation Army Disaster Team in Haiti.  He has been communicating with The Salvation Army in Indiana whenever possible.  His latest message was sent to us on the evening of Sunday, January 24:

I have been in the UN compound and in the UN cluster meetings. This is the structure set up by the UN to organize logistics, shelter, medical, humanitarian needs, and security. I deliver the information back to The Salvation Army command center and make requests for anything the UN clusters may need. I have arranged for the delivery of food to 2000 people at the Delma Salvation Army.  The distribution will take place today and all of us will be involved. We will take not only the food – which consists of rice, beans, oil and salt – but also 20 to 30 UN security forces to keep order. One distribution early on went bad and later in the day it turned into a riot and looting. On that occasion there were only 5 members of the security forces. Today will be different.

The Salvation Army compound is adjacent to a soccer stadium which has turned into a tent and shanty city. The medical and humanitarian needs are far more then words can describe. While gangs and other forces struggle for authority, the 60 year footprint of The Salvation Army in the community has allowed us to continue our work. We have reached an agreement with the UN to take over management of this site which is now one of the official camps on the government list.

We are currently waiting on the UN forces assigned to today’s food distribution. We wait with a great deal of nervousness and anticipation. Members of the team look outside the gate for the trucks to appear. As they do, a constant flow of people move by.  Many carry meager food, scraps of wood, and other articles for survival. One thing that stands out is the Sunday best clothes that have appeared for Sunday morning. No matter the situation, worship continues.

As we wait outside, a young adult male approaches and confronts us saying in his limited English, “I am hungry; I have no place to live. What are you going to do?”  He continues to repeat the words and it is obvious that he really needs someone to listen. He has lost 6 members of his family.  He has no home, no food, little hope, and is living under a sheet held up by branches. I am alone with one other worker, a local man, and a crowd begins to grow to hear the same words repeated over and over again. The children think it’s a game, but the faces on others are serious. I try to explain and give some hope for the hours to come, but the local man with me tugs at my arm saying “let’s go back out to the safety of the street.”  We go back to the compound, back to waiting for the food we have promised.

There is a constant resonance from the nearly 10,000 people in the area that only lowers at night, but never goes away. It carries the cries of angst, pain, and despair. We hear every note of it and pray for endurance.

As we work in the heat and the glare of the clouds from the burning sewage and trash piles, we by nature struggle to breath. We try to hold our natural instinct to turn and move away. We know that through this haze, those who God has placed in front of us are waiting on what help we can supply – we will supply. God says, “Have faith.” Even though we do, we must continue to spread that faith to others through care, love; a bottle of water and some hope.

We continue to wait.