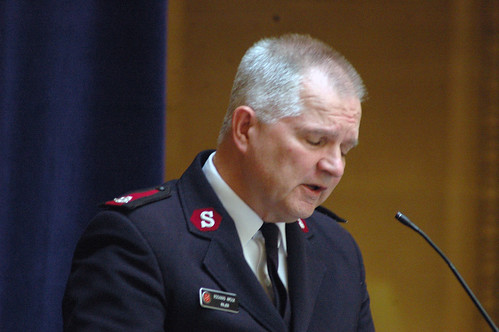 Major Richard Amick offers a prayer during the National Day of Prayer cermony at the Indiana State House.

Major Richard Amick, Divisional Commander for the Indiana Salvation Army, was one of those leaders asked to pray.  Major Amick offered prayers on behalf of our caregivers and disaster response workers.  Many other civic leaders also lead prayers, including Indiana Republican Leader, Brian Bosma.

The historic atrium was filled with music as the Herron High School Concert Choir performed several patriotic and spiritual pieces.  They finished with “The Battle Hymn of the Republic” and recieved a standing ovation from those in attendance.

Althought the National Day of Prayer was officially observed in 1952, the idea of praying as a nation has been part of our history.  In 1863, President Abraham Lincoln designated April 30 as “a day of national humiliation, fasting, and prayer.”  He went on to say:

“…it is the duty of nations as well as of men, to own their dependence upon the overruling power of God, to confess their sins and transgressions, in humble sorrow, yet with assured hope that genuine repentance will lead to mercy and pardon; and to recognize the sublime truth, announced in the Holy Scriptures and proven by all history, that those nations only are blessed whose God is the Lord.”