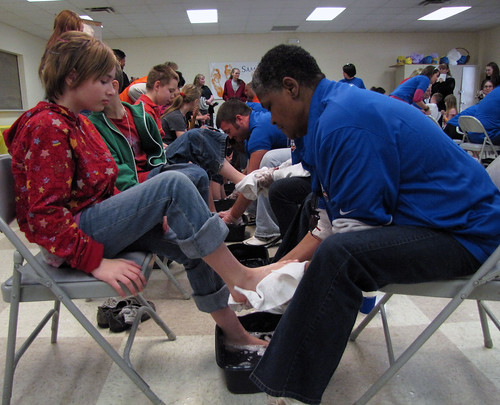 Volunteers wash kids' feet before they get new shoes at The Salvation Army in Fountain Square.

“These feel great,” said a young boy as he skipped in his new shoes down the hall of The Salvation Army in Fountain Square. He was invited – along with 250 other families – to receive new shoes and socks March 30, 2010 as part of the National Collegiate Athletic Association (NCAA) initiative to give back to the community. The NCAA partnered with Samaritan’s Feet and Feed the Hungry to give away the shoes to kids and 400 food boxes with nonperishable items.

The event was the idea of the NCAA, which wanted to help the Indianapolis area for hosting the 2010 Men’s Final Four. “We just wanted to do our part and to put on a community day,” said NCAA representative Ashley Dunigan.

The day wasn’t just about new shoes or food, but about servitude according to Joe Locke from Samaritan’s Feet. This servitude was performed by washing the children’s feet. One reason for washing the feet Locke explained was because new shoes and socks need clean feet, but the more symbolic reason was because it was something that Christ did for his Disciples. “Christ gave his best,” said Locke. “We want to give our best.”

Many parents were very appreciative. *Susan, a single mother of two, recently moved and is currently living without utilities and little food. Her kids are staying with her parents while she gets her home ready. “Right now I have nothing,” said Susan, explaining that her needs are genuine. “People like me right now need help.”

The Salvation Army Fountain Square Corps, located at 1337 Shelby St., is managed by Captains Marcos and Luci Ramirez, where they promote a community of mental, physical and spiritual health.

* Name has been changed to protect the individual’s identity