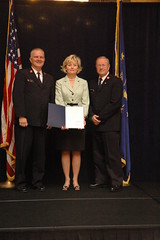 The Salvation Army’s New Albany Corps was recognized today at the Indiana Statehouse as the recipient of a grant from the Office of Energy Development’s (OED) Energy Efficiency and Conservation Block Grant (EECBG).  The monies from this grant will enable them to make much needed repairs on the facilities in Clark County and put the Army at the forefront for being environmentally responsible.

Preparations for obtaining the grant have been many months in the making, but those efforts finally paid off.  The grant will go towards a project with the purpose of substantially reducing energy consumption, lower maintenance and capital costs. Also, in an effort to lower the environmental impact of the Army’s facility in Clarksville, the project will include upgrading the heating system, lighting, roofing and skylights. All of the mentioned repairs are being done with the overall intent of increasing the energy efficiency of the buildings.

The benefits from this award go further than just the actual repairs.  As of March 2010, Clark County’s unemployment rate was 9.3%, which is the highest rate of unemployment recorded in March for the last 10 years.  Several new jobs within Clarksville’s job market are anticipated to be added during the scope of this project. In such a depressed job market, any job added to the economy is of major benefit to the entire community. A $100,000 matching grant from the Ogle Foundation will also be added to complete the project.

As one of 58 organizations and non-profits participating in the ceremony, the Army’s award was acknowledged by Lt. Governor Becky Skillman in the North Atrium of the Statehouse, in downtown Indianapolis. Grantees were mostly from central Indiana and all were implementing similar projects as to The Salvation Army’s.  However, the Army’s $100,000 grant award was one of a few at that notable amount, making it a testimony of the confidence that is placed in The Salvation Army’s motto: Doing the Most Good!