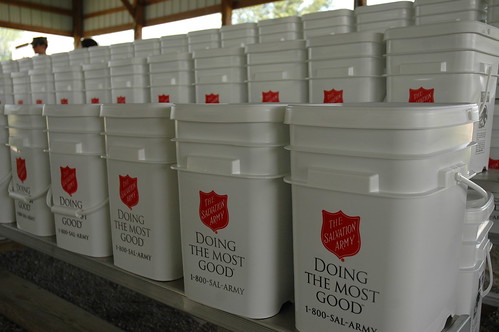 Nearly 1,000 flood kits have been handed out to flood victims in Indiana.

Latest update May 3, 11am: Our EDS Director, Jerry Larsen reports that flood kits are being delivered to the following Indiana cities and assessment of additional areas for needed response is being done

For over a week now, Salvation Army Emergency Disaster Service teams have been serving flood victims in several Indiana communities. Nearly 1,000 clean-up kits have been distributed to victims in New Albany, Princeton, Madison, Columbus, and Evansville.

For 5 days, EDS teams in Evansville served meals to over 800 people each day.  In New Albany, The Salvation Army opened a shelter for flood victims, and while their EDS teams are serving in Clark, Washington, and Floyd counties.  More than 1,000 meals are have been served to victims and first responders there.

The Salvaiton Army’s Emergency Disaster Services will continue to assist those in need during the flooding in Southern Indiana.  To make a donation call 1-800-SAL-ARMY, or donate online here.