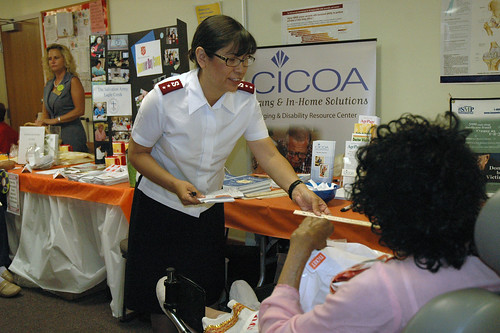 “One of the best kept secrets in The Salvation Army.”  That’s how Andrea Robinson describes The Salvation Army’s Booth Manor Apartments for Seniors.  The apartments provide low income housing for those 62 and over who can live independently.  Currently, there are 75 seniors who have made Booth Manor their home.

But Andrea wanted to do more for her residents and began to discuss options with her friends, Anna Pennycuff of People First Hospice, and Anna Duckett of Northwest Manor.  “We discovered there were a lot of services out there for seniors that are offered on a sliding scale or for free, and our residents didn’t know about any of them,” said Robinson.

They decided the best way to inform people about these services was to hold a health fair.  On July 30, The Salvation Army’s Booth Manor hosted it’s first annual health fair.  Health care providers and services from around Marion county offered dental screenings, bone density scans, glucose screenings, and pharmaceutical advice to the hundreds of area seniors who attended the event.  The fair also offered food and entertainment for those who attended.

The creators of the event hope it will be a great benefit to seniors who are struggling with their health care in these tough economic times.  “We hope everyone leaves with information they can use to help them take better care of themselves,” said Pennycuff.  Organizers were expecting to see more than 300 seniors attend the Health Fair.

See Photos Of The Event