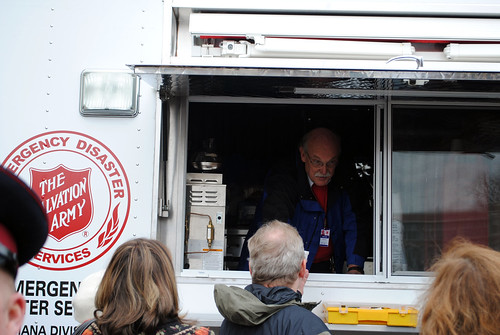 Updates coming in this morning from Salvation Army corps in both Columbus and Bloomington:

Columbus -Lt. Alan Sladek reports his corps has power now but they lost power for about two hours.   Rhere’s a town, Garden City, in Columbus Twp. that was hit extremely hard last night. He’s on his way to check out the situation.   The Columbus Fire Dept. has requested Lt. Sladek to serve as their chaplain.  He’ll update us on their needs once he assesses the situation in Garden City and the south side of Columbus.

300-350 residents who were without power will be served lunch at the Columbus Corps today.

Bloomington – A trailer park was hit pretty hard. Many tree limbs are down in the downtown Bloomington area.

Bedford – An EDS team has been sent from our New Albany Corps to Bedford to provide assistance.

Further updates will be made available as we receive them. To make a $10 donation towards The Salvation Army’s assistance for those affected by last night’s storms/tornadoes in Indiana, text the word HOOSIER to 80888. Donations can also be made online at www.salvationarmyindiana.org. by specifying “Indiana tornado” as the designation.