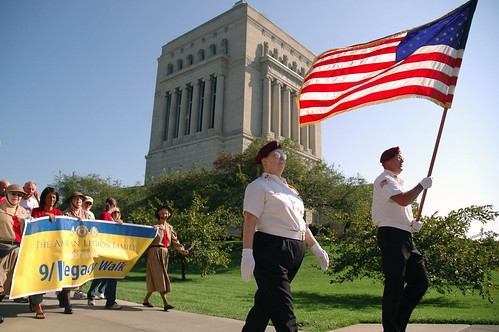 The Salvation Army Donut Girls help lead the way during the 9/11 Legacy Walk in downtown Indianapolis.

Almost all of us can remember where we were and what we were doing 8 years ago today as the events of September 11, 2001 unfolded and changed our nation forever. To rememer this day, and honor those who lost their lives, the American Legion organized the 9/11 Legacy Walk.

The event began with a short ceremony on the north steps of the Indiana War Memorial in downtown Indianapolis. Then, the American Legion lead a parade of citizens, leaders, and service organizations up Pennsylvania Avenue to the American Legion Headquarter, and then down Meridian Street to Monument Circle.

The 9/11 Legacy Walk touched many of those who participated. When asked what the event meant to her, Salvation Army volunteer Annie Yelverton had trouble putting her response into word. “My husband retired from the US Army and we had friends who lost their lives in the Pentagon that day,” she said through tears. “We just want to honor them.”

You can find out more about The Salvation Army Donut Girls by visiting their Facebook page.