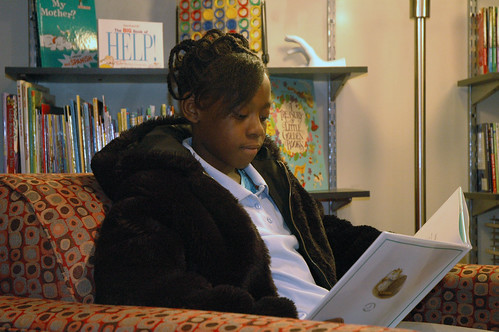 On Thursday, November 5, The Salvation Army opened a new Library/Media Center at its Eagle Creek location on the Westside of Indianapolis.  The new facility was made possible by a $25,000 grant from Target stores.  The grand opening began with an open house and ribbon cutting ceremony which featured local author – Lorene Burkhart,  Douglas Hairston – Director of the Mayor’s Front Porch Alliance, and Major Richard Amick – Divisional Commander for the Indiana Division.

The $25,000 grant was part of a $1 million donation to The Salvation Army to revitalize the organization’s libraries, media centers and educational facilities across the country.  The Salvation Army used the money to refurbish a room in their community center.  The remodel included new lighting fixtures, flooring, bookshelves, plenty of books, and workspaces. Some more advanced pieces of technology, including computers and a smart board, will also be available to give kids a place to study and learn during regularly scheduled after-school activities.   Also available will be Rosetta Stone software which will help with The Salvation Army’s ESL (English as a Second Language) classes.  “This is a wonderful thing that Target has done.  Our business partners around the community are stepping up and helping our youth and our seniors and it’s great to see,” said Douglas Hairston.

The new facility is just part of Target’s support or local communities.  “At Target, our local grants are making a difference in the communities we serve,” said Laysha Ward, vice president, community relations, Target. “We’re proud to partner with The Salvation Army as part of our ongoing commitment to give back to the communities where our guests and team members live and work.”

In addition to the grant, Target also provided a crew of volunteers to help with the labor and get the room ready for its unveiling. Adrianne Billafana, executive team leader for Human Resources at a nearby Target store, helped organize the employee-volunteers to complete the work. Although Target does many volunteer projects in the community year-round, this one has more interest for many of the volunteers.  “This is really cool,” said Billafana. “This is the first project where the money for the work comes from us, and we get to come in and do the work. It’s full circle.”