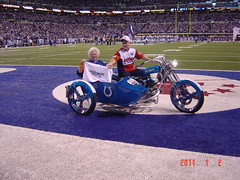 Salvation Army volunteer Evelyn Higgins leads the Colts out on the field to meet the Titans at Lucas Oil, Jan. 2, 2010.

It comes around each December – one of our biggest fundraisers. Radiothon. During this fast-paced, fun-filled weekend of radio chatter and hourly surprises, listeners call-in to pledge their support. This year’s gig was sponsored by the Colts, thus many of the prize packages included game tickets, autographed helmets/balls, and such. One deserving hourly winner was none other than longtime Salvation Army volunteer Evelyn Higgins.

Evelyn scored big with the chance to not only take 3 others with her to Sunday’s Colts vs. Titans game, but to actually ride along on the Lucas Oil motorcycle to lead the team out on the field. She was in church when she got the call from Salvation Army employee, Georgette Winkel, saying that she had won the package. By the time she left church that day, she’d already had several offers to buy the prize from her.

To say that Evelyn deserved this prize is an understatement. She has been a loyal and generous volunteer for 14 years, helping with everything from Emergency Disaster Services (EDS) to bell ringing. She started with Coats for Kids when her service sorority, Sigma Phi Gamma International was looking for service projects. She was hooked and has been volunteering ever since. Evelyn is also one of the original Doughnut Girls for The Salvation Army which attends various military related events to promote awareness of the service of these ladies during wartime by serving coffee and doughnuts to veterans. She gladly offers her time with every programs and event the Army holds. It seems fitting that she would be given a special ride onto the field, as a leader to victory.  “The whole experience was great and all the Colts personnel were terrific. Mr. Matt Godbout met us inside the stadium about an hour before kickoff, took us down to the field level and we got to watch the Colts go through some pre-game drills. Then I got into the motorcycle sidecar and was given a t-shirt and towel. I waved the towel as we led the team onto the field and that was an awesome experience. And to top off the day, the Colts won the game, the AFC South title, and a home game for the playoffs!”

Evelyn says she enjoys working with kids and the military, so she expects to continue volunteering with “the organization that Does the Most Good.”

If you’d like to know more about opportunities to volunteer with us, please contact Elizabeth Wilhelm at (317)224-1010.