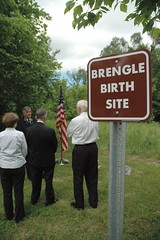 Commissioner Kenneth Baillie speaks about Samuel Brengle at his birth site in Fredericksburg, IN during a celebration on Sunday June 6, 2010.

Down by the Blue River, among the lively old oaks and rolling hills of southern Indiana was born a man whose influence would someday travel the world. Samuel Logan Brengle, born  June 1, 1860 in Fredericksburg went on to become the first Salvation Army Commissioner born in the United States. The Indiana Division gathered in Fredericksburg on Sunday to commemorate the 150th anniversary of Brengle’s birth, with songs and stories.

After graduating from DePauw University in Indiana, Brengle spent much of his young adulthood making his way around the country evangelizing. “Many of our generation have stories to tell of relatives having shown hospitality to those such as Brengle. They get around, these itinerant traveling preachers.” said Commissioner Kenneth Baillie, who came to participate in the celebration. And the stories were lively on this day, as several locals wandered into the freshly cut field to share their memories of Brengle’s legacy in Fredericksburg. Local Ben Weathers described his experience at the 100th year remembrance of Brengle’s birth. He was only 16 at the time but remembers The Salvation Army personnel camping overnight by the river to carry out a more lengthy celebration. Weathers mingled for the afternoon, on this day 50 years later, and Commissioner Baillie presented him with a book by Brengle.

Fredericksburg United Methodist Episcopal Church, Brengle’s first church home, welcomed the Indiana Divisional Band and other guests, including Commissioners Kenneth and Joy Baillie and Majors Richard and Vicki Amick. Following the sermon, delivered by Commissioner Baillie, the festivities continued at the location of Samuel Brengle’s birth site just down the road from the church. Nearby was also a cemetery where several of Brengle’s relatives were laid to rest; small red flags marking the stones for visitors to recognize.

With the cooperation of mild temperatures and no rain, Roxanne Haley brought the EDS canteen from the New Albany Corps to serve lunch to the locals and guests. The afternoon was concluded by a short dedication and congratulatory words shared from various state and national leaders who could not attend.

The monuments and street signs at Jefferson and Fredericksburg/Depauw Rd.  will remain to mark the birth site of Samuel Brengle for all who wish to visit and pay tribute to the man who said with passion for his savior and people, “All that God asks is that the heart should be cleansed from sin, and full of love, whether it be the tender heart of the little child, with feeble powers of loving, or of the full-grown man, or of the flaming archangel before the throne. This is holiness and this only. It is nothing less than this, and it can be nothing more.”