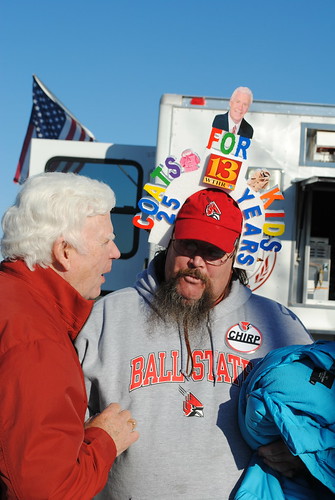 Bob Gregory and fan "Mark" celebrate the 25th Anniversary of Coats for Kids at Tuchman Cleaners in Fishers.

The Coats for Kids campaign was started 25 years ago – a partnership between WTHR, The Salvation Army and Tuchman Cleaners. This means that for 25 years, those folks have been hard at work, year after year, providing a coat to any child in the Central Indiana area who needs one. Nearly 200,000 coats have been distributed to children in need during those 25 years!  Now that’s something to celebrate!

In honor of the 25th anniversary of this ongoing campaign, representatives from each Coats for Kids partner gathered at the Fishers Tuchman Cleaners for a public celebration. It was an effort to make one last push for coat donations, as well as to give applause to the longest running public service campaign through WTHR’s community affairs department. The Salvation Army canteen served warm hot dogs free of charge as a gesture of gratefulness for all who support Coats for Kids. Kids enjoyed our Red Kettle bounce house and a few games. Weather Director Emeritus for WTHR Channel 13, Bob Gregory,  was there to meet and greet the public along with other WTHR staff . Gregory is the Coats for Kids Honorary Chairman and spearheaded the original idea. “It is unique for a partnership like this to not only continue, but grow over the past 25 years.  Tuchman Cleaners, WTHR -TV and the Salvation Army’s cooperation in this Autumn program keeps the entire central community warm all year long. Now a quarter of a century long, I don’t think there is anything like it,” said Gregory.

For Tuchman Cleaners, the campaign means collecting coats at all of their 25 locations around Central Indiana and cleaning them daily. The coats are picked up by The Salvation Army for storing at their Divisional Headquarters or taken by Tuchman’s shuttle drivers  directly to the Indiana State Fairgrounds during the week of distribution. Mike Washington, Tuchman’s District Manager over all 25 Tuchman locations shared at the celebration, “The partnership means a lot for Tuchman. We appreciate WTHR keeping it going for 25 years. This year, I think we’ll be able to keep a lot of kids warm all season long.”

The Coats for Kids campaign has received recognition for making a difference in the lives of children in Central Indiana, such as the Arthur W. Page Mid-America Award for Excellence in Corporate Communication and also a CASPER (Community Appreciation for Public Enlightenment & Relations) given by United Way. As of Friday, prior to the event at Tuchman, coats collected totaled 5,375  between the members of the partnership. Donations will be accepted through Monday, October 24, at any Tuchman Cleaners or on The Salvation Army Indiana Division’s website.