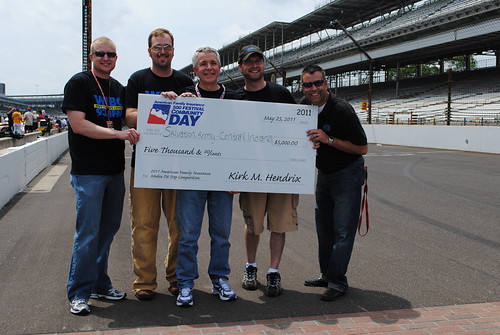 Team WIBC raced to win the Media Pit Challenge at the Indianapolis Motor Speedway today.  In spite of impending severe weather and mechanical difficulties, local media teams competed to win the $5,000 prize for their chosen charity.  For several years, WIBC has chosen The Salvation Army as their benefactor, in addition to the many other ways the station partners with us.

This year’s win came as a surprise following the challenge of rapid times from other teams. Mike Rowland, Media Director for The Salvation Army, sat in the driver’s seat as WIBC personalities worked to change two tires and beat the lowest time. Mike says, “The good thing about WIBC is that they’re not out here just to win bragging rights.They’re out here to win for The Salvation Army so that we can continue to help those in need.”

Team WIBC won with a time of just over 12 seconds.

Our thanks goes to WIBC team members Denny Smith, Joe Ulery, Dan McGowan and Reid Parker for being a fantastic crew!