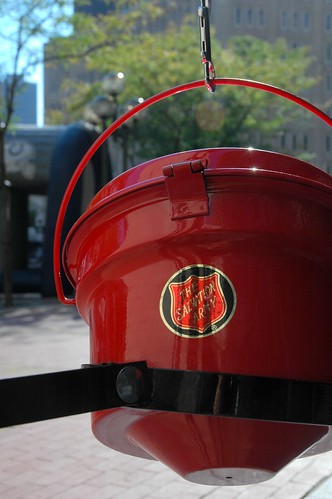 The Salvation Army will kick-off its annual Tree of Lights campaign this Thursday, but this year donors will have a two new ways to give! In addition to the traditional Red Kettles which soon be appearing in 150 locations around central Indiana, the Army will be trying a new Text donation option as well as a special campaign using Facebook and Twitter.

The new “Text2Give” campaign will allow donors to make a gift using their cell phone. By texting the word “RING” to 85944 they can donate $5, or by texting the word “GIVE” to 85944 they’ll be able to make a $10 donation. This new texting option will be displayed at all Red Kettle locations. “Not a lot of people carry cash anymore and this just gives them another option to make a donation when they pass a kettle,” said Jeff Stanger, Development Director for The Salvation Army.

Along with the new Text campaign, The Salvation Army is putting more of an emphasis on Social Media. To help kick-off the Tree of Lights campaign, the Army will be running a companion campaign using Facebook and Twitter. 10,000 Meals 10 Days, will engage followers and ask them to “Like” or “Retweet” the cause which will provide meals for those in need. “We’re expanding our social media efforts this Christmas season. Social Media allows to talk with donors and volunteers, not just to donors and volunteers. That’s incredibly important because being relevant means listening to and adapting with the needs of our community. Social Media can help us do that more effectively,” said Stanger.

Based on the cost of a meal served at our shelter or any one of our community centers in the city, 10,000 Meals 10 Days is aimed at continuing to feed those who come to us hungry and needing assistance.  WISH-TV will be promoting the campaign on their website with a video that can also be found at http://salvationarmyindiana.org.

The Tree of Lights Kick-Off is 11:15 AM this Thursday, November 18, at The Salvation Army’s Headquarters on 3100 North Meridian Street. This year’s goal is $2.93 million dollars. The campaign will run through January 31, 2011. You can follow this year’s campaign by clicking the link above.