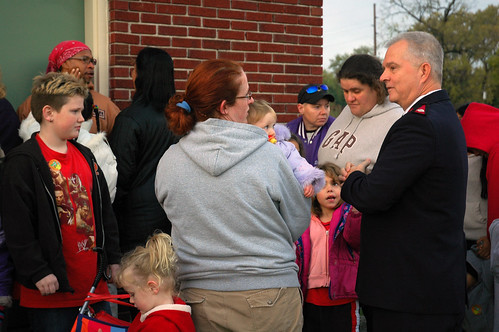 Salvation Army Indiana Divisional Commander listens to concerns from those in line for Coats for Kids in 2009.

A new report from The Chronicle of Philanthropy shows that donations to the nation’s biggest charities dropped 11 percent last year – the worst decline in the publication’s two decades of Philanthropy 400 rankings. And among the ten charities that raised the most last year, six of them reported declines in giving. Giving to United Way Worldwide (no. 1) decreased by 4.5 percent and to The Salvation Army USA (no. 2) by 8.4 percent…and these were the smallest declines among the top-ranking groups.

Locally, our donations were down nearly $300,000 for 2009-10. That’s about 10 percent of last year’s Christmas fundraising goal! Ironically, we’ve seen a spike in requests for financial assistance for rent and utilities and for food. In fact, we’ve served about 4,000 more of our neighbors in need in spite of bringing in less funds. How’d we do it? Cash reserves. The Salvation Army is pretty financially savvy when it comes to endowments and savings. Thankfully, when that rainy day came this year, we had the resources to continue to serve, and serve more, without tightening the belt too much. That won’t be the case in months to come.  Appearing on the WIBC Morning News, Jeff Stanger, Development Director for The Salvation Army Indiana said, “The cash reserves were used to make up the difference, but that won’t work for next year. Without an increase in donations, The Salvation Army won’t be able to help as many people next year.”

We’re gearing up for our Christmas season and it looks like it’s going to be a busy one. We’re really hustling to gather enough coats to meet our community’s needs at our Coats for Kids distribution on October 30. The final days of collecting are upon us. If you haven’t had a chance to swing by a Tuchman Cleaners and drop off those coats, now’s the time. And you can always donate towards a new coat on our secure website.

It’s also the perfect time to start thinking about our 16th annual WIBC Radiothon coming up on December 3-5. We’re looking for 32 businesses to become hourly sponsors and set the foundation of giving for listeners to call in and pledge. There are lots of ways to put your company’s dollars to work for your community. Check out our event website and find out how you can join Indianapolis Colts’ Tom Zupancic and 93 WIBC/1070 ESPN’s ‘Big’ Joe Staysniak in supporting The Salvation Army’s life-changing programs right here in Central Indiana.

We’ve proved that The Salvation Army is “doing the most good” with less, can you help us do even more? Call Kristen at 224-1019 to find out how.

Taken from saindy.org and written by Kristen Grills.